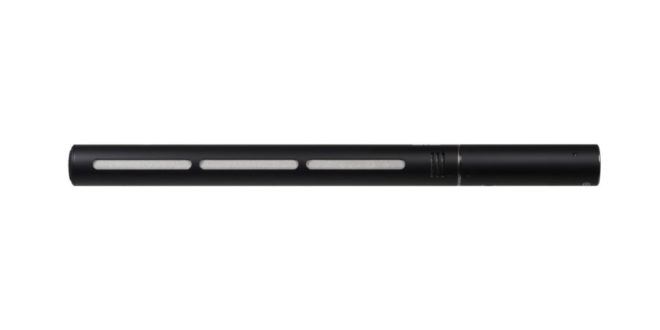 I’ve been using Audio-Technica mics for 25 years now; gun mics mostly but also headworn, handheld, radio and lately dynamic instrument mics, yet I must admit there are still parts of their extensive range that are a little mysterious to me, like their large diaphragm studio mics which I’ve never had a real chance to explore.

So when asked if I wanted to review A-T’s latest large diaphragm condenser mic – the BP28 – I was frankly more than a little excited. While I was waiting for the parcel to arrive I cruised the web and to my surprise I found there had been a mistake. Pictures of the BP28 revealed what looked like a gun mic, not the side address U87 studio-style hottie I had been expecting. But was it the images that were wrong or the description?

Well when the parcel arrived, it turned out to be less of a parcel and more of a tube – a fat tube! And guess what, the BP28 is both a large diaphragm condenser and a gun mic! So how do we quantify ‘large’? Well most of my pencil mics, including my gun mics, are about 22mm in diameter. The BP28 is 29mm, or maybe it’s 28mm, hence the name. Now six or seven millimeters is not a giant step for mankind, but given that capsule area goes by the square of the radius, a small increase in diameter results in a significantly bigger capsule. And bigger mic capsules means less self noise. They capture more acoustic energy and have higher output for a given input signal, and therefore they are quieter.

However, capsule size is not a one way street, notionally smaller capsules are more rigid and therefore can take more level before overload. I checked the specs – Audio-Technica claim 143 dB as max SPL for the BP28, pardon? That is a technical marvel. A testimony to A-T’s engineering control and innovation. And when I asked the A-T technical department about relative noise figures they replied that the BP28 was twice as quiet as their high end ‘normal’ gun mic – the 4071.

One interesting choice for the maker of gun mics is the length of the interference tube. The longer the tube, the more directionality or suck you get, but at the expense of more weight and more clumsy handling. So the classic Sennheiser MKH 416 is 250mm long and weighs 175 grams. The BP28 is 355mm long and weighs 223 grams. The longer tube definitely provides more directivity and the weight gain, unlike mine, is not as bad as you might think. And that ‘length’ of tube is I think a deliberate choice made by A-T, putting the BP28 between the 416 and longer mics like the MKH70. The BP28’s choice of tube length means a mic with plenty of discrimination but without being unwieldy.

And now we get right down to the nitty gritty, there are three things that might well seal the deal – the sound, the price and the support. Let’s start with the price; the BP28 will cost round about a thousand pounds and the longer version – the BP28L – is another 200 odd quid. For the BP28 this is handily less than some of the direct competition and only two thirds of the cost of some pricier models that you might consider. Support wise, Cinela don’t currently have a suspension for the BP28 but Rycote reckon the the WS5 with 30mm lyres will do the trick nicely. Sadly, we didn’t manage to get them together in time for this review.

Then we’re left with the sound. We all know that for vocals in the studio, large diaphragms are king, and the reason is very simple. Studio engineers prefer the sound of large diaphragm mics for voices. In the studio they could use anything they like and what they like by-and-large is your big ass condenser. Take a peek at the frequency response of the BP28 – flat from below 50Hz (18dB/octave filter below 80Hz switchable available) to round about 15kHz and then a gentle roll off. This is brave, because there’s a huge temptation to stick some HF boost in there to help it cut through. That was then, but now with iso everything and EQ on every channel of your Scorpio, you can have that top end lift, or not – you choose. Just like a studio engineer.

The BP28 sounds like a large diaphragm condenser and I for one found the combination of bottom end oomph, mid range clarity and top end warmth very attractive indeed. Audio-Technica have brought a new level of genuine choice to location sound with the BP28.