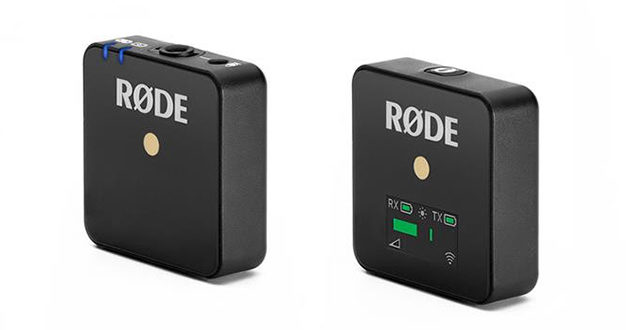 This is showing my age, but do you remember Sony’s original Walkman Pro cassette recorder? This little baby was beloved of radio documentary makers in the days before DAT, Minidisc and then solid state. It might not have had the ultimate quality of a reel-to-reel Nagra but you could put it in your coat pocket. It’s come to mind just now because I’m mulling over the very blurry line between pro and consumer kit.

A cynical radio station engineer once told me that things like the Sony were professional because they’d been painted black and had the word “Professional” written on them. So where does gear like RØDE’s Wireless Go fit in? It’s a wireless microphone system that is tailored towards DSLR shooters (a corner of the market I’ve looked at quite a few times in AMI over the years). It’s easy to use but claims to offer excellent results, so is it professional or consumer? And does it matter anyway?

The kit comes in a neatly packaged box, akin to a new phone. Slide it open and you get the small receiver, the combined mic/TX, an audio lead and two USB C charge cables. There is also a pair of small, clip-on windshields for the microphone (one to wear and one for spare).

The initial instructions are minimal: there is an illustrated quick guide on the box, but further information can be downloaded from RØDE. You turn each of the units on by pressing a soft-touch button. The TX has two blue lights that show that the battery is charged and that it’s connected to the receiver. It also has a socket to plug in an optional lavalier mic (on a 3.5mm TRS minijack). Of course, there’s also the built in omni-directional condenser microphone, which I assume most users will go for.

On the identically sized receiver is a small, colour LED screen which shows the amount of charge in the batteries of both units, the signal strength between the two (the 2.4gHz transmission system claims a range of 70m, line of sight) and the audio output level to the camera or recorder. This is adjusted via a three-stage control on the bottom of the receiver.

The built-in mic has a maximum SPL of 100dB and a frequency range from 50Hz to 20kHz. It’s designed to be clipped onto clothing like a conventional personal mic, except it’s a small square slab, rather than a microphone. But there is, of course, no wiring leading anywhere. It may well be visible to the camera/viewer but it’s small and neat enough to be barely noticeable.

On test, I opted to use it with an audio recorder rather than a camera, as I wanted to be better able to monitor the sound and also wanted the recording quality to be as strong as possible (my SLR is competent with sound but not much better). I used my Roland R26 which has, amongst other things, a minijack input.

With everything hooked up, the first thing I noticed was the strength of the audio signal coming through to the Roland – a promising sign. I set the recorder going, pulled off my headphones and went for a wander with the mic unit clipped to my shirt, just below my chin. I left the room and chatted as I walked about.

The recording was excellent. The mic has a very strong sound to it and didn’t show any signs of picking up rattle as I moved around. Even when I was in another room, there was no drop-out and the level and quality were consistently good. Given this is running on a wireless system, I might have expected some deficiencies but there weren’t any.

The Wireless Go is not aimed at sound recordists working on big budget productions in film or TV. Its target users are vloggers, YouTubers, onstage presenters and the like, and for them it offers a one-box solution to better audio. Given the number of YouTube videos my kids have made me endure where the mic is clearly camera mounted and several feet from the presenter, I’d say it would instantly improve most recorders by several hundred per cent. It’s a novel approach, putting the mic and transmitter together, and for those target users it should be a great addition to their arsenal of kit. It’s more visible than a small personal mic but I don’t think that would be an issue to the final audience in these circumstances. Plus there is always the option of using a separate lavalier.

RØDE have done it again. They seem to have single-handedly colonised the world of prosumer audio kit with more and more products that offer quality sound without the cost, faff and intimidating complexity of higher end gear. I can think of a number of uses for the Wireless Go beyond those I’ve already listed and certainly away from just video sound. If you need a small wireless mic solution that’s literally press-and-go, it’s worth a look.