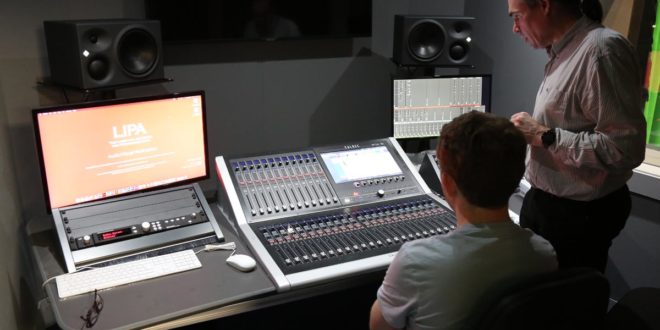 The Liverpool Institute for Performing Arts has chosen the Calrec Brio 36 broadcast audio console for its new campus TV and recording studio.

Established by Sir Paul McCartney and Mark Featherstone-Witty (founder of the BRIT School) in Paul McCartney’s old school on Mount Street, LIPA produces huge numbers of highly talented graduates each year in both the performance and technical aspects of the performing arts.

“We want to produce graduates with the necessary skills to enter the world of broadcast, and hit the ground running,” said Thornton. “So it was time to create a module catering for vision. Because we’re an Institute for the Performing Arts we wanted to cover several aspects of vision work, ranging from traditional multi camera capture, through non traditional uses of vision combined with theatre, and on into the growth areas of AR and VR.”

The decision was made therefore to repurpose one of the theatre spaces, The Sennheiser Studio, into a multi-purpose TV studio. Laid out a bit like an OB truck, the sound control room is at the end of the Vision Gallery. Then there are separate rooms for colour grading, motion capture, and a small post production room with ProTools and a 5.1 Neumann speaker system. The design of the acoustically important spaces was carried out by consultancy firm Whitemark who have a long-term relationship with LIPA, and give annual lectures as part of the Recording Technology course.

The new TV Studio’s Sound Control room consists of the Calrec Brio 36 mixer, ProTools, Neumann speakers, and a Bricasti M7 reverb. Unlike an OB truck, or the majority of sound rooms in large studio complexes, there is a window through to the studio floor. “That’s all part of the multi use requirement,” explained Thornton. “We can use the TV studio as a live space, and the Calrec for normal sound mixing, with direct contact between the mix engineer and the artists.”

Elaborating on the decision to install the Brio, Thornton said, “I’d insisted that LIPA invest in a product from one of the ‘big broadcast audio brands.’ In this way, students leave LIPA having used real software from a real broadcast company, and have experience of a console they are very likely to encounter in the real world. It’s the same reason we feature SSL in our main music mix room, and an AVID S6 in the main post-production suite.”

The Calrec Brio was purchased through Studiocare in Liverpool, and equipped with three option cards for MADI, SDI embed and SDI de-embed. Systems integration was implemented by Robin Howell of Wire Broadcast, with the furniture designed by AKA Design.