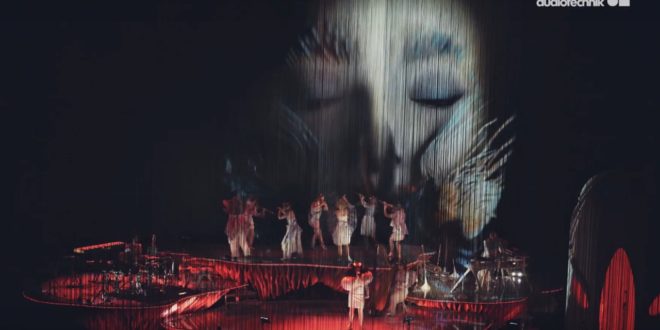 On November 13, Björk kicked off the European portion of her critically-acclaimed Cornucopia tour, deploying a d&b Soundscape immersive sound system as the show scales up dramatically from its debut in New York’s new arts centre – The Shed – to a comprehensive run of large scale arena dates including London’s 02 arena.

“Björk wanted the sound for Cornucopia to create an otherworldly sensory experience for the audience that draws all the visual, aural and virtual elements together,” said Jones. “By utilising Soundscape from the studio all the way through to the show performances, she has delivered on that impressive vision.”

While already utilised in many major musical productions, installations, festivals and concerts, the Cornucopia tour marks one of the most ambitious and extensive applications of the Soundscape system. Björk’s creative vision, combined with d&b’s vision for designing high quality audio experiences, provided the opportunity to bring Cornucopia’s multi-sensory world to large-scale arena-based audiences.

To date, Cornucopia shows in the US and Mexico have received universal critical acclaim from audiences and critics alike for its stunning visuals and unmatched audio quality.

To get a look at the Cornucopia Tour click HERE to see it in action.