Home / Feature / New Horizons: behind the scenes at LEWITT ahead of its 10th anniversary 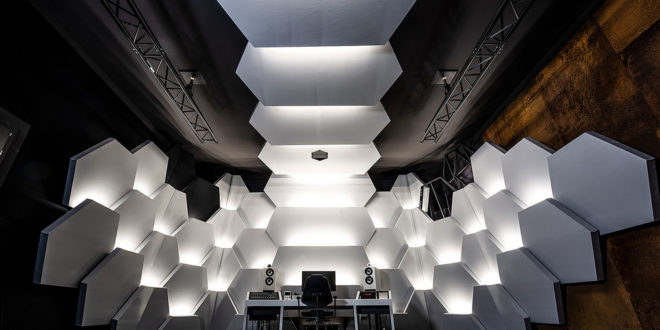 As part of its 10th anniversary, Austrian manufacturer LEWITT is soon to introduce what it describes as a truly unique, ‘revolutionary’ flagship microphone. Colby Ramsey recently took a trip to the company’s headquarters in the heart of Vienna, Austria, to get an exclusive first listen of the new model, which has been a decade in the making…

Ten years is not a very long time when talking about the lifespan of a business, yet it’s a long enough period of time in which extensive change can and may occur. This has certainly been the case at LEWITT, which is gearing up to celebrate its 10th anniversary next year with the launch of a new flagship microphone.

But while the microphone won’t be unveiled until 2020, LEWITT recently carried out a very focussed R&D process with the LEWITT Sound Survey, inviting everyone with a passion for sound to play a crucial role in its development using an online tool. Here, end users – who were entered into a draw to win one of the flagship microphones – were asked if they could hear the difference between various sound characters and which they prefer, allowing audio enthusiasts at every level to get involved in the “creation of a new microphone classic.”

At the end of September, AMI was very kindly invited to LEWITT’s headquarters in Vienna, Austria, and was given the chance to speak to its team of audio specialists, including CEO and founder Roman Perschon. The prototype of the new flagship microphone offering had been completed just one week before our visit.

“That was our challenge from the beginning,” says Perschon of the Sound Survey. “To find out what sound people are looking for. We wanted to really interact with our closest network here in Vienna – recording engineers and studios – as it can be quite difficult to nail down exactly what users are looking for in a sound.”

One really important thing is that LEWITT does all the electronics and microphone designs itself, so if something needs to be changed then it can be done without delay.

With the company’s 040 MATCH model for example, and as explained by head of product and marketing Moritz Lochner, “the measurement is essentially built into the microphone, allowing for quicker adjustment and automated measurement with audio precision software, which in turn allows for quicker production and therefore cheaper costs.”

Keen to find out more about what makes him tick, I sat down for some traditional Chinese tea with Roman Perschon – the company’s founder and CEO – in his office.

“I always had a passion for music and audio gear,” he tells me. “As a teenager I started out building my own speakers which are the ones you see over here [in my office]. It was a fun project and they sound horrible compared to today’s standards, but back then they were loud and did the job!”

Hungry to learn, Perschon decided to go and study electronics. He then worked at AKG, which he says was an interesting time for him: “At one point I thought to myself, there can be more interesting, more innovative, better-sounding microphones, and shortly after this I had the opportunity to found LEWITT,” he says. “In the early days it was difficult of course. We were only a handful of dedicated, very skilled people – a group of people who I was very lucky to find actually.”

LEWITT started out with a huge portfolio, introducing 16 microphones at the 2010 NAMM Show. Since then, it has further developed its lineup and in recent years has been quite successful indeed. “So I find myself in a sweet spot here, because it’s not a big corporation where all the great ideas get swallowed up in corporate structures,” Perschon explains. “At the same time, it’s not a boutique company, so we have the team and the skills to really take on complex engineering processes.”

After some time at LEWITT’s HQ, it quickly became clear to me that it is a great environment to work in and bring ideas to life. Roman’s team is diverse, to say the least, with a number of very experienced people from all different walks of life. “This makes it a very fun place to work, and is also the main reason why we can do our own designs,” he tells me. “Nothing we do is a copy of a copy – it’s all our own designs and we develop everything from scratch, which allows us to follow a very user-focussed approach. When we start a project, from the very beginning we invite recording engineers and musicians to sit down at the table and try to lay down what it is really about. How we can improve, how we can innovate, and it is these kinds of conversations that give us a really good understanding of the challenge ahead. Obviously then it’s our task to translate that into technical requirements and documentation, which then becomes the foundation of our projects.”

Being able to get in touch with the local and global audio community in this way is clearly very helpful and fruitful for LEWITT. At the same time, having a team of capable people who can bring its ideas to life is absolutely crucial.

Our conversation soon moved on to the kind of trends that Roman has been seeing in the microphone market of late: “First of all you have the global players, and what they do is basically reinvent their classic and legendary products,” he says. “Then there’s a part of the industry which tries to imitate these legendary, vintage microphones. I really didn’t want to go down that path, and instead wanted to do something new, something innovative and I wanted to do my own designs. I didn’t at that time see the need for another company doing another imitation of a legendary microphone. This was always an important thing for me, because I always want to bring true value to the end user – there is no other way to stay in it for the long haul.”

It’s an ever changing industry which has seen a lot of the big studios going out of business and a vast market of YouTubers, podcasters and bedroom recording guys emerge, which is the reason why LEWITT always wanted to make its products available to a broad audience. “That is also why we didn’t focus on going towards a boutique brand approach,” Perschon adds. “We wanted to offer the best performance to price ratio, and make our products accessible to a large audience. That’s why in recent years we have introduced products like LCT 040 and 140, which are incredibly affordable, high quality microphones.”

It actually took LEWITT quite some time to distill the right product idea. Its first years were spent bouncing back and forth suggestions about what it could be, “but we eventually got to the point where we could define it in great detail, make sure that we’re not doing stuff for the sake of it, and confirm something that really benefits our audience,” remarks Perschon. “Including them in the development process was very important and although it took time, it was a pleasurable thing to do.”

While the development of LEWITT’s new flagship mic has been ticking away in the background, in the meantime it has of course developed the LCT Series, learning more and honing its capabilities to share improved versions over the years. The new flagship model benefits from all of these processes and experiences. “Now we are at the point where it just feels right to introduce, and it just so happens that it coincides with the tenth anniversary – I’m really looking forward to getting it out there!”

There definitely seems to be a bit of a startup feel about the company and its people. Everyone in the office is excited for the future and really wants to get behind the brand, and it is a priority of Roman’s to keep it this way: “There’s a good reason why corporations have all these corporate processes, but I hope we can stay away from this as long as possible and maintain this startup vibe, because it’s such a nice environment to work,” he tells me. “It’s not employees, it’s colleagues and friends and it makes it really fun to be here.”

So upon reflecting on a decade of business, what does the next ten years look like for LEWITT?

“I think there are a lot of opportunities out there that one could focus on, but at this point in time I am really excited to introduce the new model,” Perschon reveals. “It’s been ten years in the making and it is such a pleasure to finally see this come to fruition. It’s definitely a big one for us, and very much defines what we are as a company. It offers tremendous freedom to the end user to adjust the sound in a very meaningful and enabling way. It is a cutting-edge technology product, and will be available at a very good price-performance ratio as well. It ticks all the boxes and it’s basically the essence of what LEWITT is and wants to be – it’s a dream come true actually!”