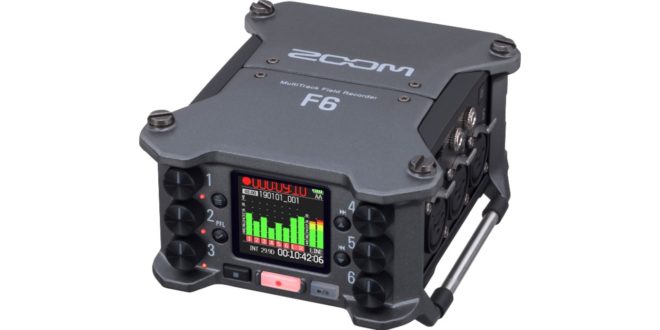 As a middle aged man I have many hats. And this week I have taken most of them off to Zoom, having spent some time with their new F6 recorder. It is both a natural evolution of Zoom’s F Series and an exuberant implementation of leading-edge audio technology in a tiny, affordable package.

Let’s start with the brightest, shiniest light of the F6. The inputs, six of them, each on Neutrik XLRs and each with a full mic preamp. The input’s party trick is that each one has two analogue to digital converters – yes count them, two each! These converters are able to separately deal with loud signals and quiet signals: their outputs are then cunningly combined and the resulting digital signal is encoded in a 32-bit float file. The idea is that you extend the dynamic range of your recording path to the point where clipping becomes very, very unlikely.

The F6 has a dynamic range of 131dB and to put that in perspective my AKG 300B microphone has a sound pressure limit at 132 dB. The F6 then has enough dynamic range to capture most of life without having to fiddle with input gain or worry about limiters or clipping. Now those who have been paying attention will know that dual ADC inputs have been around for a while; Zaxcom led the way with Neverclip followed by Sonosax, both of whom have well established products in the marketplace, at a price. And the scene is hotting up with the new Sound Devices MixPre 2 series also on board with multiple ADCs. However, the Zoom brings the technology to a new level of affordability in offering six of these inputs at a very attractive price. 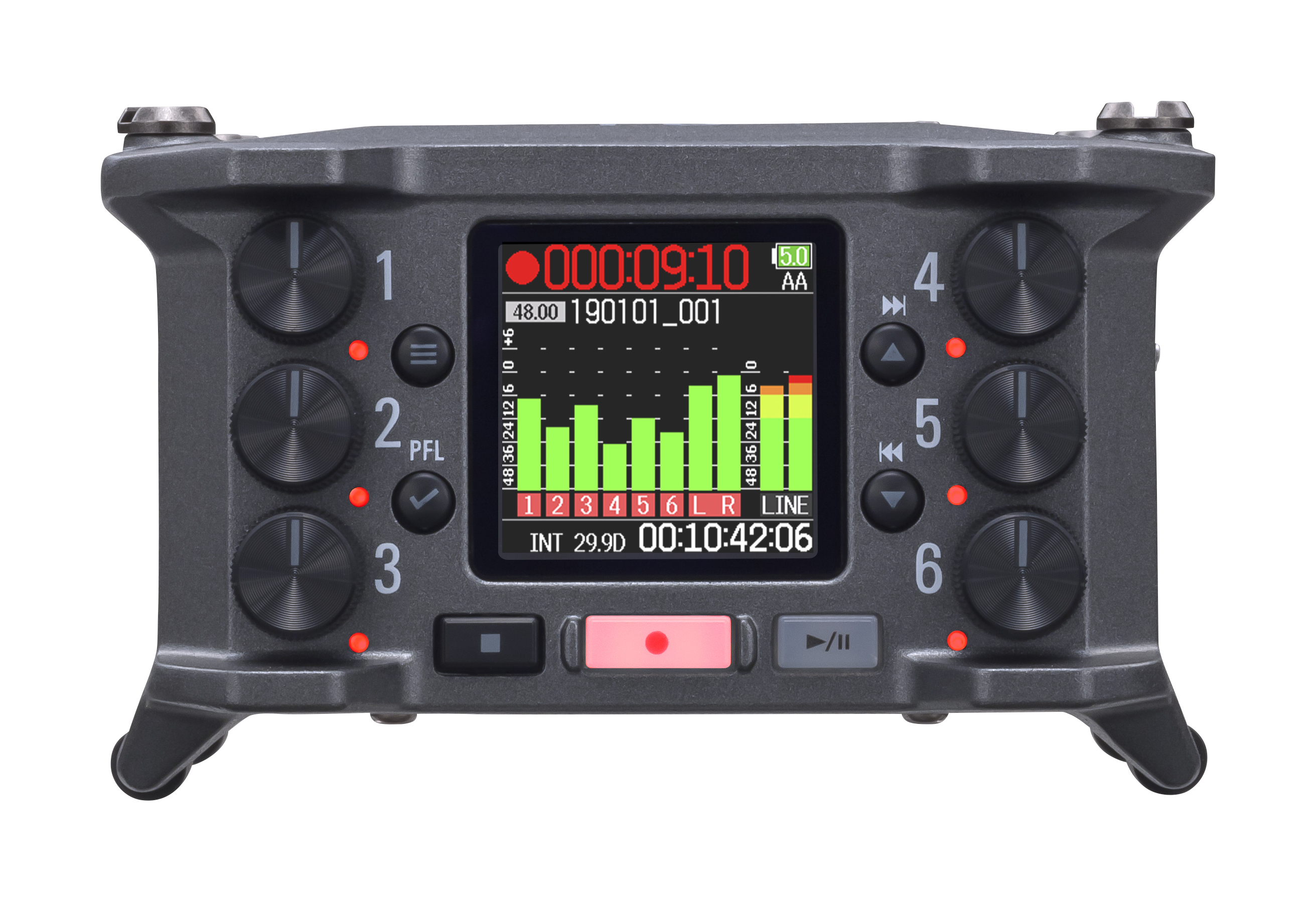 In practice the dual ADC function and the 32-bit float file format are available as a package. You select the 32-bit float option in your Rec parameters and, low and behold, your input gain trim is now greyed out and the dual ADCs are engaged. The theory being there is now no need to set the approximate gain in trim because you are able to capture the entire dynamic range of the signal due to the extended dynamic range and the floating point file format. You can still adjust the ‘level’ on the six front panel encoders but you are effectively moving the signal up and down in the digital domain post the mic amp and the ADC. The result is freedom from worrying about setting your trim level or limiters or clipping. Now, you can clip the system – my Neumann BCM 104 will accept 138 dB with no pad engaged. Put it next to a crash cymbal and hit it with a gorilla, the F6 will politely tell you that you have exceeded the system parameters, plus 4 dBu at the mic input. Actually even with the gorilla, looking at the recorded waveform, I couldn’t see much ‘squaring’ of the signal. The point is now the only time you need worry about overload is pretty much the same point at which your mics will also be at or close to overload.

In 32-bit float you can’t use the limiters and are restricted to 96kHz, but you can use the F6 as a normal 24 or 16-bit recorder at sample rates up to 192 and set the input trim in the normal fashion. The mic amps are the same as in the F4 and F8, offering 75 dB of gain and low noise. If you want you can record in dual file formats – 16 or 24-bit linear and 32-bit float and you always have the option of recording a L/R mix so the F6 is technically a 14-track recorder.

And there’s a lot more to the F6. I have and love a Zoom F4; it’s a great bit of kit but it is not without shortcomings. The screen is monochrome and a bit drab; the F6 has a bright colour screen. The F4 has only four proper mic inputs; the F6 has six full fat mic inputs and the dual ADC, 32-bit float option. The F4 has time code but no back up battery so if you power down over lunch you’ll lose your time code settings; the F6 cunningly adds the RTC to time code when restarted after switch off. The F4 has digital limiters and the F6 has what Zoom call hybrid limiters – looking at the block diagram they still look digital to me but in action they are very effective. And remember that the 32-bit float option makes limiters moot. The F6 has a Sony L series battery sled on the back and this is a real bonus. My aged L batteries (left over from a 744T!) last hours and hours and hours. I left the F6 recording a couple of tracks with phantom mics and 12 hours later it was still happily recording, with power to spare. You can also power it with four AAs or via the USB C port. It works as an audio interface on PC, Mac and iPad and there’s an optional Bluetooth dongle for the iOS control app and wireless time code, along with a Zoom FRC-8 hardware controller with linear faders.  There’s even ten monitor setups available on the headphone control. 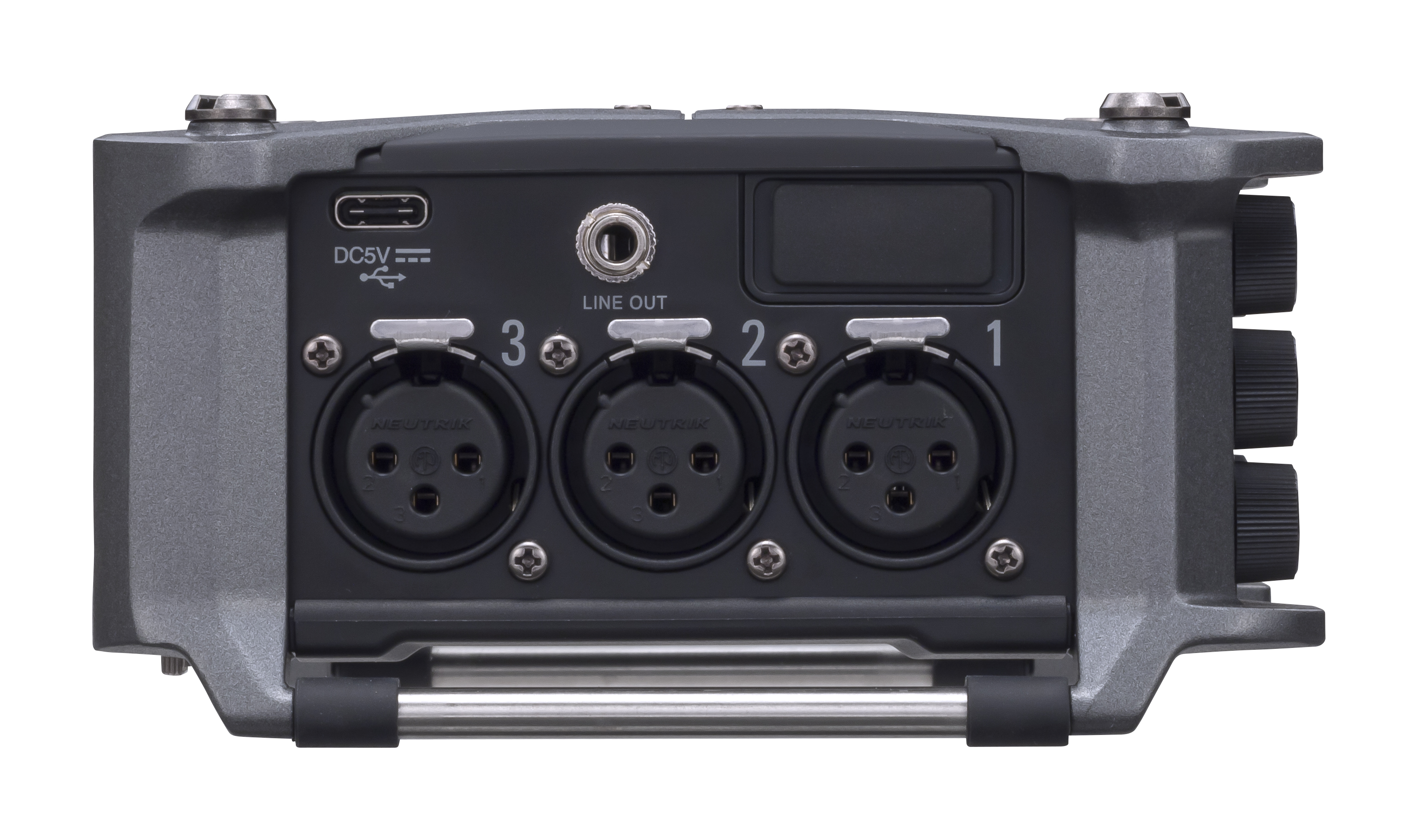 Hang about though, I still have the odd hat on. The form factor of the F6 is very much designed with DSLRs in mind. It is tiny – my eyes are old and fingers fat! All menus are on four buttons, and we miss the F4’s encoder with push selectivity. I’m not sure about time code on mini jack, though in mitigation the F6 includes pull up and down sample rates for 24fps. The F6 has only a single on-board record medium – SD card – which is behind the L series battery, though I should say the F6 can function as a USB interface while recording. It also has MS and Ambisonic options on record and built-in automix.

Now we are used to the idea that recorders will get smaller and more fully featured, but by any standards the F6 is an exciting product. It’s not a universal solution nor is it trying to be. It is ridiculously portable – with six mic inputs and a decent L series battery it will run all day, easily. The dual ADC and 32-bit float tech make tough jobs much, much easier, and for most situations this is simply set and forget. To misquote Chief Brody, ‘The Zoom F6 – you’re going to need a bigger hat!’

Previous Pressure Cooker Studios opts for full Genelec monitoring system
Next New Horizons: behind the scenes at LEWITT ahead of its 10th anniversary