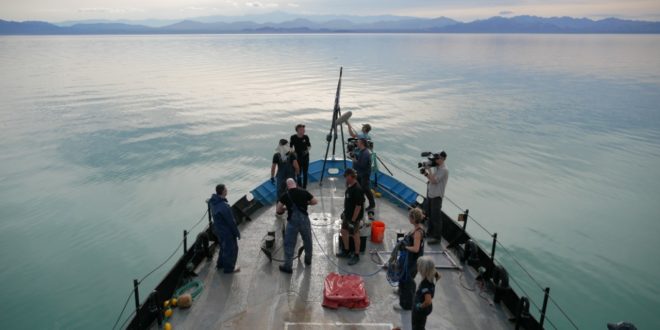 Behind the scenes during production of "Sea of Shadows" (National Geographic)

Bernhard Zorzi has lent his expertise to numerous projects ranging from documentaries to film and television, most recently designing the sound for critically-acclaimed documentary Sea of Shadows. The film follows a team of dedicated scientists, conservationists, undercover agents and the Mexican navy as they put their lives on the line to save the endangered vaquita porpoises from being hunted to extinction by the Mexican drug cartel and Chinese poachers.

Directed by award-winning Austrian director and cinematographer, Richard Ladkani, Sea of Shadows was acquired by National Geographic after it premiered at Sundance where it won the Audience Award and was also nominated for the Grand Jury Prize for World Cinema – Documentary. Bernhard previously worked with Ladkani on The Ivory Game, for which he received a Golden Reel Award nomination for Best Sound Editing from the Motion Picture Sound Editors (MPSE).

How did you first get involved with sound design for documentaries?

My first experience working on a documentary was for the Austrian TV series, Universum. The best part about collaborating with the directors of this show was their first-hand knowledge about sound in nature. Their input, combined with my own observations from being outside and studying the environment, taught me a great deal about how to rebuild naturalistic soundscapes, as well as engineer them to fill multidimensional spaces such as surround sound.

Working with Richard Ladkani along with my favourite re-recording mixer, Michael Plöderl (Blautöne Studios in Vienna), is not only a pleasure and fun – since we’re practically family after working together on The Ivory Game in 2016 – but we also have a highly effective and inspiring way of working together. There seems to be a good balance of experimenting and decision making which keeps the flow going to generate a soundtrack that supports the narrative of the film, and at the same time pulls you in and wraps you into its world.

Could you provide us with some details of your workflow/approach in designing and mixing the sound for Sea of Shadows?

Since the film had to be prepared and mixed for Dolby Atmos, I started creating my sound design natively in this format, working with 7.1.4 beds and the individual objects.

Just like with The Ivory Game, the main task in sound design post was to maintain and reproduce the original soundscape of the locations as closely as possible. I therefore used as much of the production sound as I could in order to build my surround ambiences; I used key sound elements typical for each setting in the film, and then carefully combined them with compatible layers from my own sound library in order to flesh them out. I actually used a lot of spectral editing and restoration tools to pull the original sounds from the production sound. I always try to establish an interaction between my sound design and the music of a film.

I was already familiar with the composer Scott Salinas’ style from The Ivory Game. So for example, I used different styles of drone sounds in a particular pitch, some rhythmic elements like impacts or just organic textures with a musical element – mostly with a bending pitch – to wrap the sound design around his music, making transitions smoother but also with the goal of making the rhythm of picture and sound layers more homogeneous.

What unique challenges are you presented with when mixing sound for films shot on location with animals and varying landscapes? What is your approach to solving these challenges?

I wouldn’t say that there is a general approach for me, since the material you get from production is so different depending on budget, location and many other things. I would say that spectral editing – as mentioned before – became a very important part of my work. Analysing the production sound, finding characteristics and details, and isolating key elements are essential for me to get familiar with the scenery, locations and people. Furthermore, it sets the frame for creating the film’s soundtrack.

At the same time it is of great importance to stay attentive and find useful sounds in every type of recording which you can get from shooting the movie. If you look into voice or field recordings, or even the soundtrack of a camera or another device that was in the right time and place, you could find that one sound you so desperately needed, that the director talked about all the time emphasising its uniqueness and importance.

From your perspective, why is it so crucial to place emphasis on the sound design of documentaries – such as Sea of Shadows – that attempt to convey such an important message? What part does the sound play in conveying an emotional response from the viewer?

As explained before in mentioning some ideas about how to approach a film’s soundtrack, I like to think that a documentary’s thread of information combined with its narrative structure can not only be supported by sound as a tool of exposition but also as a vehicle providing a more visceral layer of story-telling, like music for opera does through its use of leitmotifs, moods and temporal structuring.

Not only can it help to deliver those messages more easily, it can also keep them in people’s minds, giving them more time to reflect and elaborate on upcoming thoughts, sometimes resulting in a better or different understanding of the matter.

Compared to our visual perception, the hearing mechanism directly feeds into the brain’s limbic system responsible for processing emotions. That makes the use of sound fundamentally important to convey an emotional response from a film’s audience. It also underlines the necessity for a considered and cautious approach when it comes to connecting sound with picture, especially in the genre of documentary film.