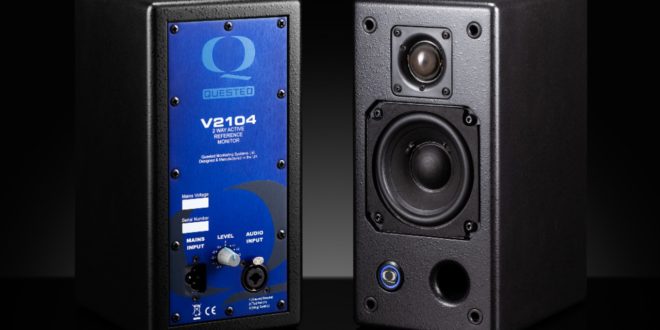 The Quested V2104 monitor is the result of a builder’s cock up. It seems that the builder delivering a multi room complex mis-measured and the resulting monitor space was too small for the planned installation of the desired Quested S6R monitors. Undaunted, Roger Quested – reaching for his monitor shrink ray – came up with the V2104.

It is a small monitor, petite even, bijou maybe. If you buy the red finish they come with a carry-case option – these are portable monitors! The last digit (or two digits) in a Quested monitor’s moniker give you the diameter of the bass driver. So that would be four inches or a hundred mm. Like I said, bijou, and of course not going to shake your windows with boombastic 50Hz bass.

Both drive units are new to Quested and each V2104 is powered by a class D amp, keeping size under control. For reasons I’ve never really been able to fathom, Quested never crossed my path in BBC world. Plenty of old school Rogers and Spendor and Harbeth, PMC and ATC. Even latterly Genelec, but no Quested, which is a shame really because what drives their monitors is very much the traditional BBC virtues of accuracy through painstaking engineering. Quested have a very focused lineup of monitors. The S Series is the entry point, the V Series the top shelf and the passive H Series for all of us who can’t face retiring our power amps.

When Stuart Down from Quested brought the box over the threshold, I thought it was a one box per speaker gig. Not at all! Did I mention they are small? Just over ten inches high, five inches wide and six inches deep. So small in fact the mains input is on a cloverleaf cable (supplied) to save space on the back panel over a standard IEC connector. Also on the back panel is a level trim and a combi jack/XLR for the input. And that’s it – no digital input, no USB input, no DSP. Which, at the risk of sounding like a luddite, I’m fine with. At this price point I want all my money spent on the basic building blocks.

The V2104 powers up on the front panel which is cool, as is the low key blue ring mounted LED around the brand identifying Q emblazoned on the power button. Blue turns to red 2dB before you clip the amp. The V2104 is front ported and has protective filters with minus three dB points at 45Hz and 30kHz. And just in case you are taking notes, the crossover point is at about 1700Hz.

So to the experience and first what you don’t get. You don’t get low bass. The V2104 is minus two dB at a hundred hertz and minus six at 88. That’s just the laws of physics applied to the size of the driver. However look again at the specs, a hundred hertz to 19kHz plus or minus two dB – these are monitors not toys. The V2104, which is not that much bigger than the ubiquitous Fostex 6301, delivers monitor quality above a hundred hertz. And like all good monitors you need to be careful what you feed them. The V2104 has proper monitor ruthlessness when it comes to revealing shortcomings in your source.

Badly recorded, ham-fistedly mixed or overcompressed material sounds just as bad as you would expect and indeed demand from a monitor who’s first duty is always honesty. If I’m doing it wrong I need the monitor to tell me. And the Questeds, despite their diminutive dimensions, are monitors – well recorded material shines. The top end in particular has an easy naturalness that is never tiring. The mid range is full of detail allowing you to dig into your mix when you need to perform audio surgery. The V2104s sing.

Actually the comparison with the Fostex 6301 – a single drive unit (four inch) classic – is instructive. The 6301 is active, bullet proof, much loved and found in broadcast vehicles and studios everywhere. The Fostex is an excellent problem solving talkback or check loudspeaker, but unlike the Quested it’s not a monitor speaker – you don’t want to make subtle mix decisions on the 6301. And for small boxes the Questeds go surprisingly loud; I was almost flat out on the DAC to light that red ring and the air was moving.

So what about the bottom octave or two? Well Quested have a couple of sub solutions and you’ll need them if you’re diving below the 100Hz line. The V2104s are not going to give you epic scale, but I tell you this: above a hundred hertz they won’t hang you out to dry, and you can mix with confidence. If you need to pack your monitors with you, if you ever carry your gear, if you record in back rooms, under stages, in vehicles or if you just want bijou monitoring, check out the V2104s and prepare to be pleasantly surprised. And raise a glass to incompetent builders everywhere.

> Accurate nearfield for use in all studio applications

> Can be configured as part of a multi-channel system