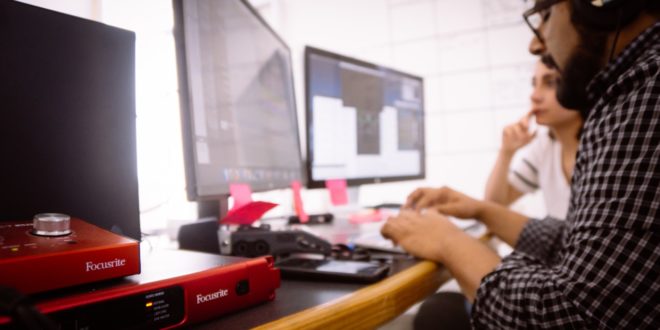 When completed by the end of 2019, the facility will house eight Dolby Atmos certified stages/cutting rooms. Keeping the workflow manageable at a high pace will be components from Focusrite’s RedNet range of Dante-networked audio converters and interfaces.

“The work is already here, so we had to get started as quickly as possible,” said Martin Hernandez, sound supervisor and designer at Cinematic Media, adding that the new facility’s location in a commercial area about an hour north of Mexico City offered them the room needed to construct a large enough facility to address Mexico’s burgeoning media business. Six stages will be open by the end of the year, plus the editorial suites.

Hernandez said that the RedNet interfaces provided Cinematic Media’s facility with the technology needed for a fast start to a reliable workflow. The equipment actually came before the space was done, set up in temporary studios even as the facility itself was being built. The high level of efficiency afforded by RedNet technology meant that they could immediately begin work as soon as equipment was installed. A speedy workflow was especially important in light of the fact that mixes would have to be transported to outsourced mixing stages temporarily while the new ones are built.

“We are cutting all sound to picture in this temporary space facility, then taking those tracks to a mixing stage for the client to listen to, then back here for the pre-mastering and final mixes,” he explained. “It’s rather hectic to have to travel so much, but it’s the only way to keep up with the workload while we wait for the soundstages to be built here. But the RedNet interfaces let us meet deadlines that we might not otherwise be able to. The RedNet units are reliable and easy to use, and they are truly plug-and-play. The Red 4Pre and RedNet HD32R interfaces connect directly to the three Pro Tools HDX systems we have in each mix studio, so we have a fully Dante-enabled network for audio between all of the rooms. The speed and ease of the workflow is amazing.”