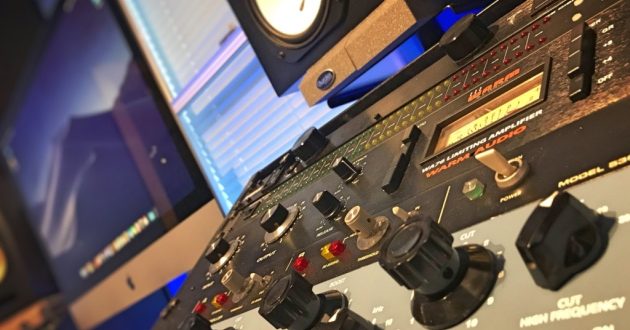 Top recording artists are being invited to make music in the north Norfolk countryside at a new studio which has been built on an old RAF base.

Twins Dane and Kyle Corby, 32, and their photographer brother Calum, 28, have spent about £30,000 on equipment at the Lightning professional recording studio at Scottow Enterprise Park, at Badersfield.

The building they now rent used to be where their father, Danny Corby, a warrant officer, once worked when it was part of the RAF Coltishall airbase.

The twins, who are both musicians and play in the four-piece band Tearaway, have named the studio after The English Electric Lightning plane, which was based at RAF Coltishall.

“It’s a good location, out of the way, and quite tranquil,” said Kyle. “Established artists can come here and be left alone, as well as local bands.”

The studio is fully equipped with a range of hardware and software, and offers recording, mixing, music production, sound design, voiceover, mastering, photo shoots and video production. It can accommodate single artists and bands and boasts a selection of instruments, such as electric and bass guitars, a drum kit, amps, keyboards and synths.

The studio’s decorated with original billboards featuring bands such as ZZ Top and Whitesnake, and recording artists will be able to use special items, including Ed Sheeran’s pop guard, bought at a charity auction, and amps used by Deep Purple and Black Sabbath.

This story was originally published on 25/10/19 via northnorfolknews.co.uk.