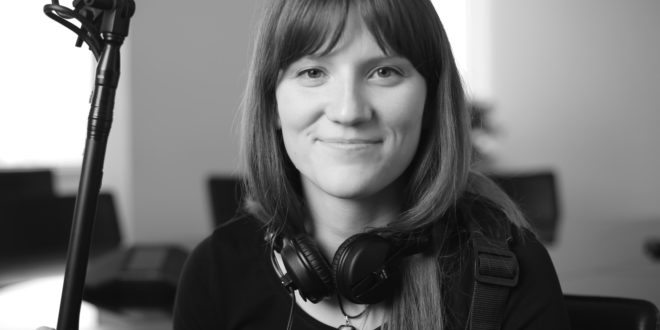 UK loudspeaker manufacturer PMC recently established the Sound For The Future Scholarship in association with the Audio Engineering Society Education Foundation, whereby a $5,000 prize will be given annually to an audio engineering graduate who is also a member of the AES.

The AES Educational Foundation was established in 1984 to encourage talented students to enter the profession of audio engineering.

The first recipient of the PMC Sound For The Future scholarship is Dora Filipovic, a PhD candidate in Digital Media Arts at the University of Surrey in the UK. Already a graduate of the University of Arts in Belgrade, Serbia, Dora has won numerous awards for her sound design work, including four for creative contribution from Radio Belgrade.

Over the past seven years, Dora has worked as a sound designer on more than 20 award-winning feature films, as well as many documentaries and short films including ‘Glances of Closed Eyes’, a documentary she created about blind and visually impaired people who use sound to introduce the viewer to their way of life. The film won national and international film festival awards for best film and sound design.

AMI recently caught up with Dora after she was awarded the scholarship:

The next project will be for my PhD studies at the University of Surrey in the UK, a piece of sound design and immersive media work which I am using to explore, understand and share children’s experiences of sight loss.

How did you first get involved in audio?

I have always loved watching films and going to film festivals in my country. Curious about what is happening “behind the scenes”, I found out about this profession and various things you can do within the sound department. Luckily, the Faculty of Dramatic Arts in Belgrade has the Department for Sound Recording and Design, where I learned and practised my skills from one of the best sound designers/professors in the Balkan area.

What was your initial reaction to being the first recipient of the new PMC/AES scholarship?

I was honoured that I received this scholarship, especially being its first recipient. I was also very excited when I saw my picture with the AES logo and read the news about the scholarship on the Audio Media International website.

It is a $5,000 prize and to receive it you have to be an AES member, have successful completion of an undergraduate degree program (typically four years) at a recognised college or university, show commitment to audio engineering (or a related field) as a career choice, be accepted or with a pending application for graduate studies leading to a masters or higher degree – or an internationally recognised equivalent – and send three recommendation letters.

To what extent do you expect the scholarship to help you with future projects and your career going forward?

With this scholarship, I will use it to cover the tuition fees for my PhD studies at the University of Surrey. I am also looking forward to meeting the team from PMC Speakers and new colleagues who must have interesting stories to tell and great ideas to share.