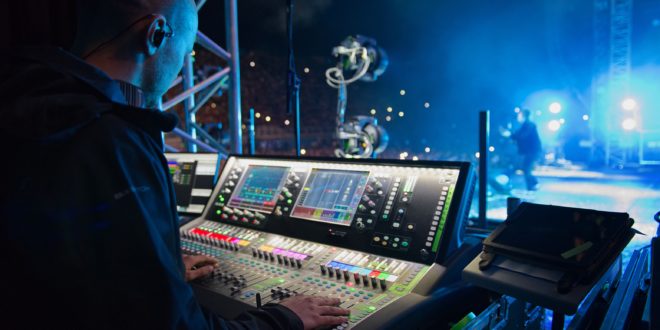 Continuing his run of sold-out arena shows, Scottish singer-songwriter Lewis Capaldi is taking on the world one show at a time, with an Allen & Heath dLive mixing system covering FOH and monitor duties.

Capaldi made history by becoming the first ever artist to both announce and sell out an arena tour before the release of his album, which went on to become the UK’s best-selling record in the past five years and gained him global mainstream success throughout 2019.

“In early 2019 we were looking for an audio package that was powerful, flexible and compact enough for us to use on every show, be it a Lewis headline as part of a tour, or a run of overseas festivals where space, weight and set-up time were at a premium,” said FOH engineer, Andrew Bush.

Prior to upscaling the surface, Bush originally opted for a smaller dLive Wings rig, which is now used for fly-in dates and comprises a multi-surface set-up with two C1500’s and a DM48 MixRack. “The combination of two C1500s and a shared DM48 easily satisfied the initial criteria and we have since moved our show files to two S5000s for our current US/EU/UK touring schedule,” explained Bush. “The transition between surfaces was easy: the dLive software is identical regardless of the stage box or surface, so moving from C1500 to S5000 was simply a case of reorganising the fader layouts.” Bush also uses a Dante card (fitted to the surface) for virtual sound-check and recording each show.

Both Bush and Lawrie make full use of dLive’s built-in FX and onboard DEEP processing features, particularly when it comes to Lewis’ vocals – “Lewis has an incredible voice, but the first time you mix it, it’s terrifying! Lewis can go from head-voice to chest-voice in a matter of seconds and so I use the Dyn8’s multiband compression and dynamic EQ, which is a complete godsend and allows me to quickly even the mix out where needed. I also love the routing options with dLive and being able to double bus, it just means I can just refine my mix more and get a really even sound at the end,” said Lawrie.

Despite almost finishing the US and European leg of the tour, 2020 will see Capaldi perform to over a quarter of a million people during his UK and European headline shows. Bush added, “In terms of the shows, they’ve added so much since the start of the year and they’ve increased in scale and capacity as we’ve had to try and keep up with Lewis’s trajectory. It’s really shown us that dLive can definitely handle the demanding needs of this tour, while providing class-leading tools and studio-quality sound.”