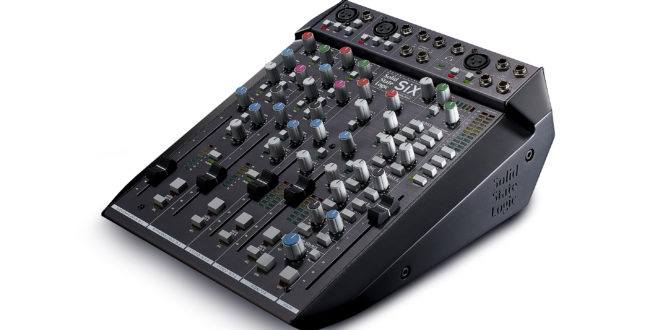 The SiX cries out to be used on location

Stephen Bennett works out the kinks with this versatile new desktop mixer for use in the studio, post-production, on stage, and for podcasting…

Anyone who’s been even remotely involved in audio production will have come across Solid State Logic (SSL). Famous for their large format, digitally controlled analogue mixers, the company’s first foray into smaller consoles was the X-Desk and its associated X-Panda sidecar. While these products feature SSL’s ‘SuperAnalogue’ circuitry, they have no microphone preamplifiers, EQ or effects on board and are basically high-quality audio routers and balancers. This is not to say they are not useful – they feature plenty of ins and outs for recording and mixdown and are compatible with SSL’s X-rack series and other outboard. I successfully use an X-Panda myself for recording, as a keyboard mixer and for summing stems to inject some of that SSL mojo into my recordings.

The company are now under the umbrella of Audiotonix and the SiX desktop mixer under review is a more traditional product altogether, with its relatively low-cost reflecting SSL’s access to its new owner’s high-quality manufacturing facilities. It’s small but, as the cliché goes, perfectly formed, measuring just 310mm by 270mm including the side panels that can be removed for rack mounting. It weighs a sturdy 3.5kg, so it’s not going to be dragged off the desk by cables and its steel chassis gives confidence to its build quality. The power supply is external and while some people don’t like these, I think that for a device that is likely to be installed and left in-situ it’s perfectly acceptable, though the SiX does cry out to be used on location.

An external PSU should help keep noise levels down as well and, on the positive side, it does have a locking plug. As you might expect from its name, the SiX sports that very same number of fader-controlled input channels and features the same SuperAnalogue circuitry as its larger brethren. The specifications are impressive – the maximum output level is +27dBu with a dynamic range of 112dB and the SiX’s frequency range extends from 4Hz to around 100kHz, which may seem overkill for us humans, but SSL say that this improves transient and time domain behaviour and in-band phase-shifts. The company has also taken care with the electronics in the signal pathway, eliminating electrolytic capacitors and using DC servo-coupling instead. All inputs and outputs are balanced. What these impressive specifications mean in practice is that the SiX is easily comparable with the clean and ‘weighty’ sonic properties of my own SSL X-Panda.

Anyone who has used an SSL will be familiar with the look and feel of the knobs and the long-throw faders which are precise and feel sturdy in use. The two microphone/line/Hi-Z instrument channels feature a useful and useable one knob compressor, a well-chosen and nice-sounding two band EQ, insert sends that double as feeds for recording and two stereo foldback cues with independent level and pan controls. The remaining four channels consist of two stereo line inputs with just cue sends. Two stereo external inputs are also provided, which can be routed to various parts of the signal flow and there are also two mix busses available. Each input channel has Pre-Fade Listen (PFL) and the microphone channels have high pass filters. Eight-LED bargraph meters, sensibly labelled with dB values, proved perfectly adequate for monitoring signals. The only thing missing is a phase switch but as I tend to sort those issues out in my DAW, I didn’t personally find it an important omission. 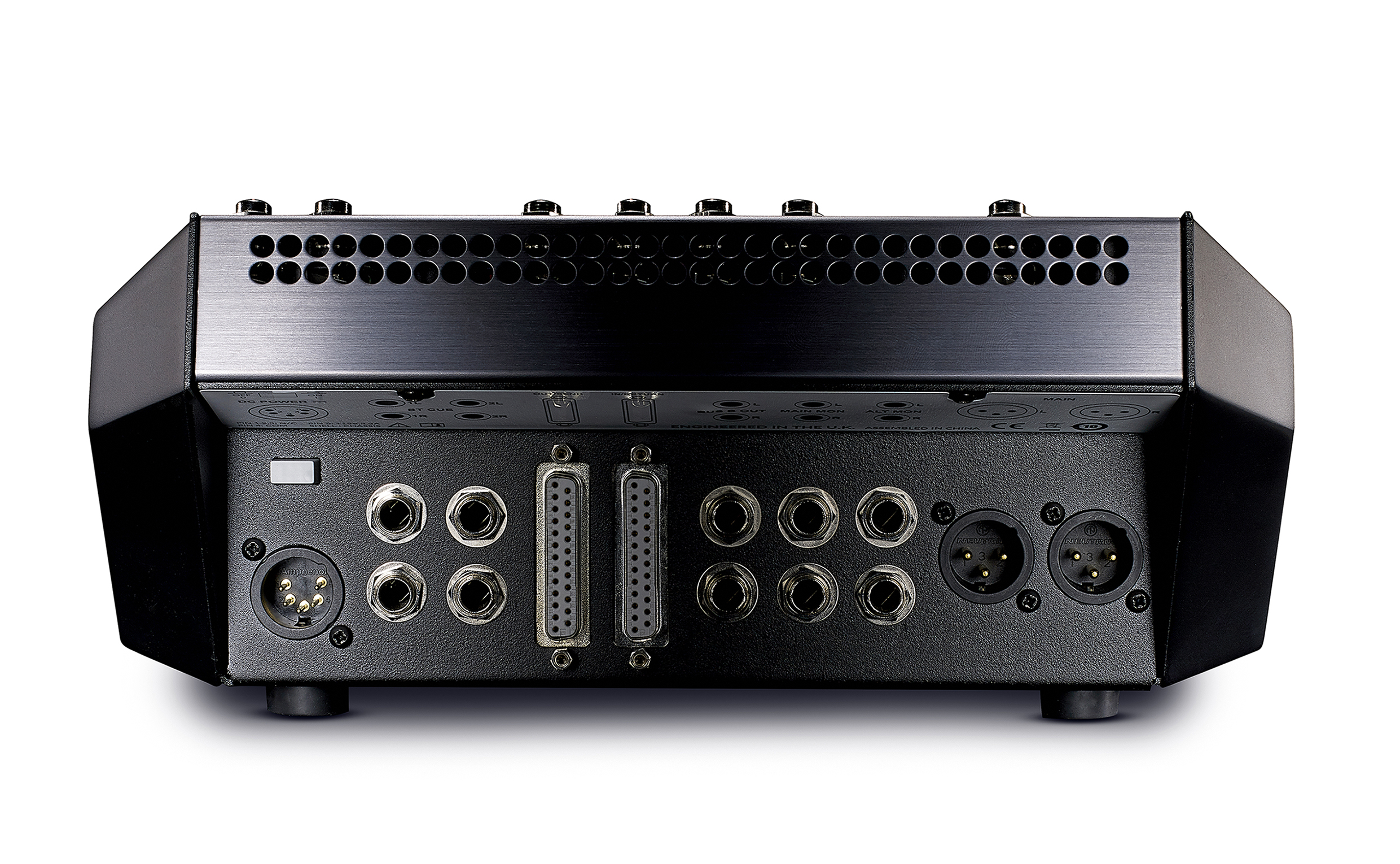 The monitoring section of the SiX rivals some standalone devices for versatility. Two sets of monitors are supported, and the user can choose to review either of the mix busses or the external inputs. The cue sends can be monitored on the single headphone output and, while there’s no talk-back microphone (a strange omission in my opinion), you can use an external one – there’s 48v phantom power available as well as SSL’s famous Listen Mic Compressor (LMC). Although this was originally designed to level out problematic performer mixes, you can also route the foldback channel into an input so you too can emulate the drum sound that made Phil Collins famous. A useful mono button lies alongside a Dim switch – which lowers the level to that set by the Dim knob – and a Cut control.

The output section consists of a decent sized 11-segment bar-graph meter scaled from -21 to +24 dBu and a 100m fader that can control cue summing, external inputs, and the stereo insert point as well as the mix bus levels. One of the features that’s going to be a major selling point of the SiX is the inclusion of a pared-down version of SSL’s G-Series stereo bus compressor. It only has two controls – Threshold and Makeup – and has a fixed ratio of 4:1 alongside, as SSL say, a “carefully selected attack and release times to suit a wide variety of mix content.”

In practice it certainly does that SSL-compressor ‘business’ and adds punch and ‘glue’ to the output. I rarely move the attack and ratio controls on my X-Rack version, so these seem sensible choices and the resulting processing is scarily comparable to my own compressor. The compressor’s gain makeup bargraph is also adequate for the use to which it is being put. The rear panel sports the foldback and cue outputs, the monitor and main outputs and the two mix busses on balanced ¼” jacks (the main mix bus is on XLRs), while the inserts and alt-inputs are all available via d-sub connectors.

Because of the small stature of the desk, it took me a while to find my way around but once familiar, it’s a doddle to use. I couldn’t resist having a go at using the LMC as a drum mic squasher and the mix bus compressor is probably worth the price of entry on its own. Sonically there was nothing to complain about; the Six sounds like a ‘proper’ SSL. The two microphone preamplifiers allowed even modest microphones to shine (as all quality ones do, and my SM57 sounded great here on snare) and the input channels’ compressor meant that I didn’t need to patch in my usual 1176 for vocals. The EQ is useful, but I suspect it’ll get most use when dropping stems through the SiX for G-Series processed mixdown.

The SSL SiX is much more of a mixing desk than it first appears and there’s nothing here that would make you question its sonic quality. When you consider that you get a couple of SSL microphone preamplifiers with their own compressors, several channels of SuperAnalogue circuitry, a flexible monitor controller, a 12-channel SSL summing mixer (using the alt inputs) and ‘colour’ and G-series compressors thrown in, the SiX starts to look like a veritable bargain.

Sure, it would be nice to have more input and output channels and microphone inputs, but this diminutive mixer packs a punch well above its weight and offers the soloist, duo or podcaster everything they need to help make sure their recordings sound as good as those they’d get in a studio using a SSL large format desk. If I have one criticism, it’s that I would have liked to have seen a USB audio interface built-in‚ but having so few physical outputs alongside the use of d-subs means that it is relatively simple to connect the SiX to a suitably attired audio interface.

With a flexible monitoring section, a fantastic mix compressor and channel EQ and a flexibility that defies its size, I’d go so far to say that the SiX is the best mixing desk I’ve used in this price range – and I can’t wait to see where SSL go with these kinds of devices. As Harold Macmillan would have said had he been an audio engineer, “We’ve never had it so good!”