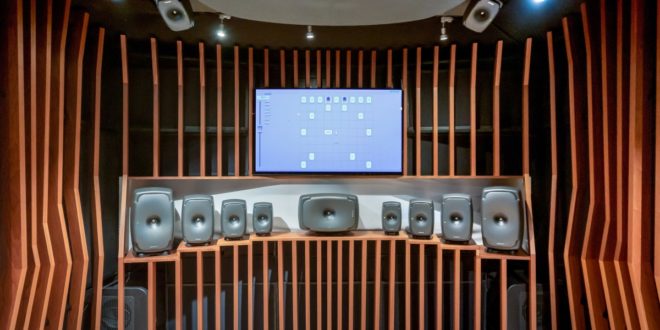 Genelec has opened a Genelec Experience Centre in central Berlin – a brand new demonstration facility designed to provide visitors with a high quality critical listening environment from stereo to immersive, and allows the Finnish manufacturer to showcase its wide range of studio monitors and AV and Home Audio loudspeakers.

The new Berlin location joins existing Experience Centre facilities in Europe and Asia, all of which allow both end users and resellers to learn more about Genelec technologies and audition a broad selection of models.

Located in Alexanderplatz, in the heart of central Berlin’s creative district, the Experience Centre is the result of a close collaboration between Genelec and kost.design, a company jointly owned by architect and studio designer Benjamin Koziczinski and acoustic designer Karlheinz Stegmaier. Kost.design was responsible for overseeing the extensive refurbishment and acoustic treatment of the entire building, resulting in premium quality listening spaces designed specifically around Genelec loudspeaker systems.

At the heart of the Centre is a 27 sq.m listening room equipped with a Genelec 7.1.4 immersive audio system featuring The Ones coaxial point source studio monitors – with the new flagship 8361A in the LCR positions, the 8341A as surrounds, the 8331A in the height locations plus a pair of 7370A subwoofers handling the low frequency content. Genelec’s own GLM software was then used to configure and fine tune the calibration of each monitor within the space for optimal in-room performance.

The listening room allows all of Genelec’s models to be auditioned on request, with the system supporting a wide range of playback formats including Pro Tools, Blu-ray, Apple TV, Netflix and major streaming providers including Spotify and Tidal. Other spaces within the Experience Centre are designed to showcase Genelec Home Audio and AV models, including a 5.1 conference room system built around special RAL-coloured 4030C installation speakers, a kitchen area utilising AIW25 in-wall architectural models, and office and bathroom spaces fitted with various 8300 series two-way smart active speakers.

The Berlin Experience Centre was officially opened at the beginning of October. Those wishing to find out more, or book a demonstration, should contact berlin.showroom@genelec.com