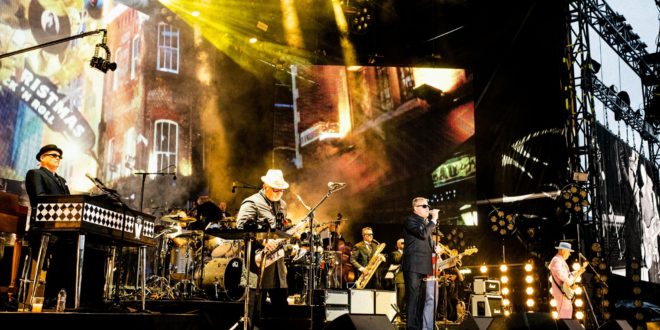 This summer, British ska band Madness celebrated 40 years of musical capers with a big anniversary gig at London’s Kenwood House, playing with a full orchestra for the first time. Andy Coules, who was on monitor duties, gives us the lowdown…

It’s hard to believe that it’s been 40 years since seven lads from Camden first fused reggae, punk and pop into their own unique “nutty sound”. In the ensuing years Madness have successfully managed to knit themselves into the fabric of British life with an impressive string of hits accompanied by memorable videos and suitably anarchic appearances on Top Of The Pops. They continue to produce original music and perform to large crowds across the globe and decided to celebrate this special anniversary with a string of shows under the banner of Madness XL.

As a band they’re no strangers to doing unusual and elaborate gigs, from their pioneering Madstock shows to the London Olympics closing ceremony and onto the roof of Buckingham Palace for the Queen’s Golden Jubilee, but one thing they’ve never done before is perform with a full orchestra. So in a welcome return to the borough of Camden they decided to do just that to a sold out crowd at Kenwood House on the 15th of June.

My role in this enterprise was to be the monitor engineer as well as the audio liaison for the various elements required in addition to the usual production – handled ably by production manager Pete Hosier. Front of house duties were to be performed by the legendary Ian Horne who has worked with the band since the very beginning (earning him the affectionate title of “Dad”). Therefore Ian, Pete and I sat down to figure out just how we were going to pull off this adventurous gig. 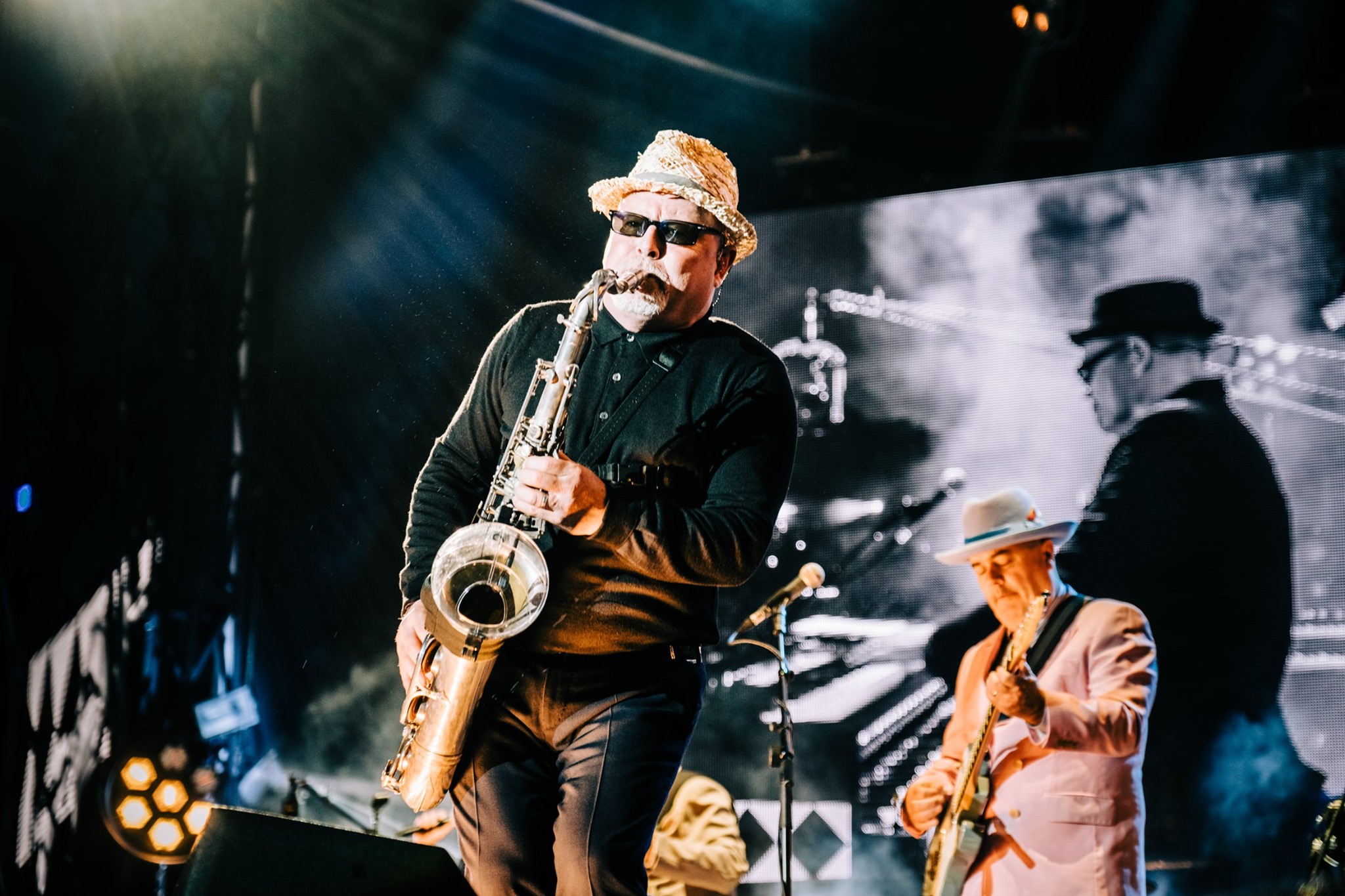 The regular version of the band is a tight 10-piece touring outfit featuring the six band members augmented by a three-piece horn section (trumpet, trombone and baritone sax) and a percussionist (who also does backing vocals). This standard configuration accounts for 44 inputs and 22 monitor outputs, eight wedge mixes and eight IEM mixes (for band and techs).

The two key decisions we made at the outset were that we wanted a microphone on every individual instrument and that we would have two consoles at FOH and on monitors (one for the band and one for the orchestra). We felt this was the best way to go as it would allow us maximum flexibility in mixing but also enable us to spread the workload so that we had engineers focusing on the main band and the orchestra separately. To that end we engaged Dennis Fernandez and Paul Keeble to man the second desks at FOH and monitors respectively. Dennis would sub mix the orchestra for Ian and Paul would do the same for me in monitor world. The show was also due to be recorded by Patrick Phillips and Oli Jacobs from Real World Studios, so we needed to take their needs into account.

At regular shows we employ a passive 48-channel two-way split to duplicate the usual input channels to FOH and monitors so we added a second 48-channel split for the orchestra feeding into the second desks at both positions. We then added a third split of all 96 channels to accommodate the recording (as they would be taking a full multi-track of all inputs). Our usual desks of choice are an Avid Profile at FOH and a Yamaha CL5 on monitors so we just doubled up with the same models for Dennis and Paul to operate; Patrick and Oli brought in an SSL L500 to feed their Pro Tools rig. 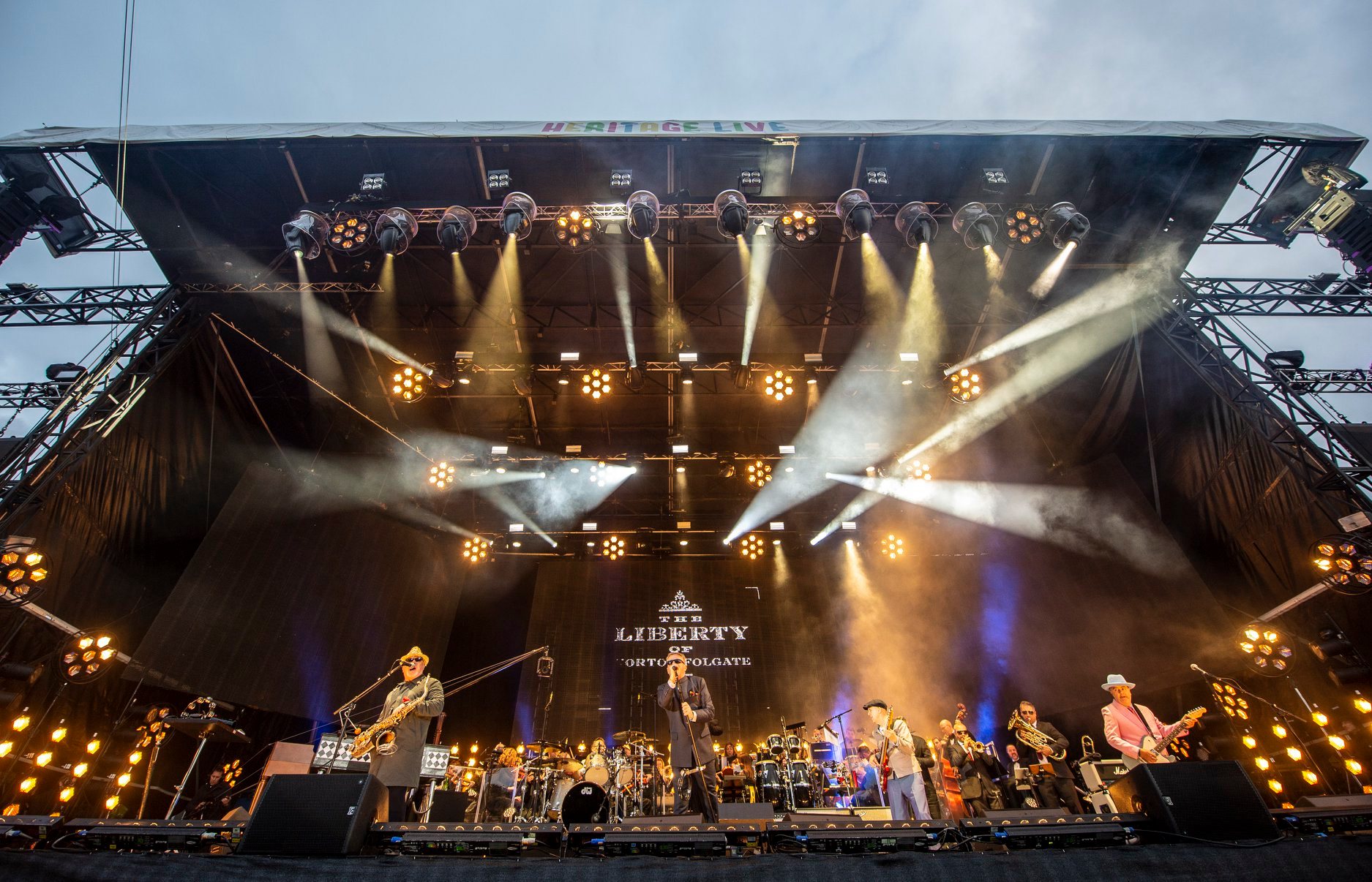 In addition to the regular monitor setup we needed to add monitors for the conductor and orchestra while trying to keep stage levels as low as possible, so I decided to deploy audio hot spots using small speakers that I could tightly control to put sound where it was needed without too much spill. In the end we used a combination of L-Acoustics 5XTs and X8s mounted on microphone stands and distributed throughout the orchestra. Being as I was already using 25 of the CL5’s mix buses (22 for the band’s wedges and IEMs plus three for cue wedge/IEMs), that left me with seven to service the orchestra so I decided to do it by section with individual mixes for the conductor, percussion, brass, woodwind, harp/keys, violins and one for the low strings (i.e. violas, doubles basses and cellos) with a monitor speaker for each pair of musicians.

So the plan we came up with involved 50 musicians generating 90 inputs being fed into five mixing desks, two of which combined into the main stereo mix – one for the recording and two supplying 32 monitor outputs running nine in-ear monitors and 32 monitor speakers, all of which was operated by six sound engineers. It was clear that this was not going to be your average gig.

In preparation for the show we had three days of rehearsal booked in – the first to set up and test the equipment, the second with just the band and the third with the band and orchestra together. Our supplier for the audio equipment was SSE (co-ordinated by Miles Hillyard) who’ve been working with the band for many years, so are familiar with their requirements while being able to expand to accommodate all the additional elements. 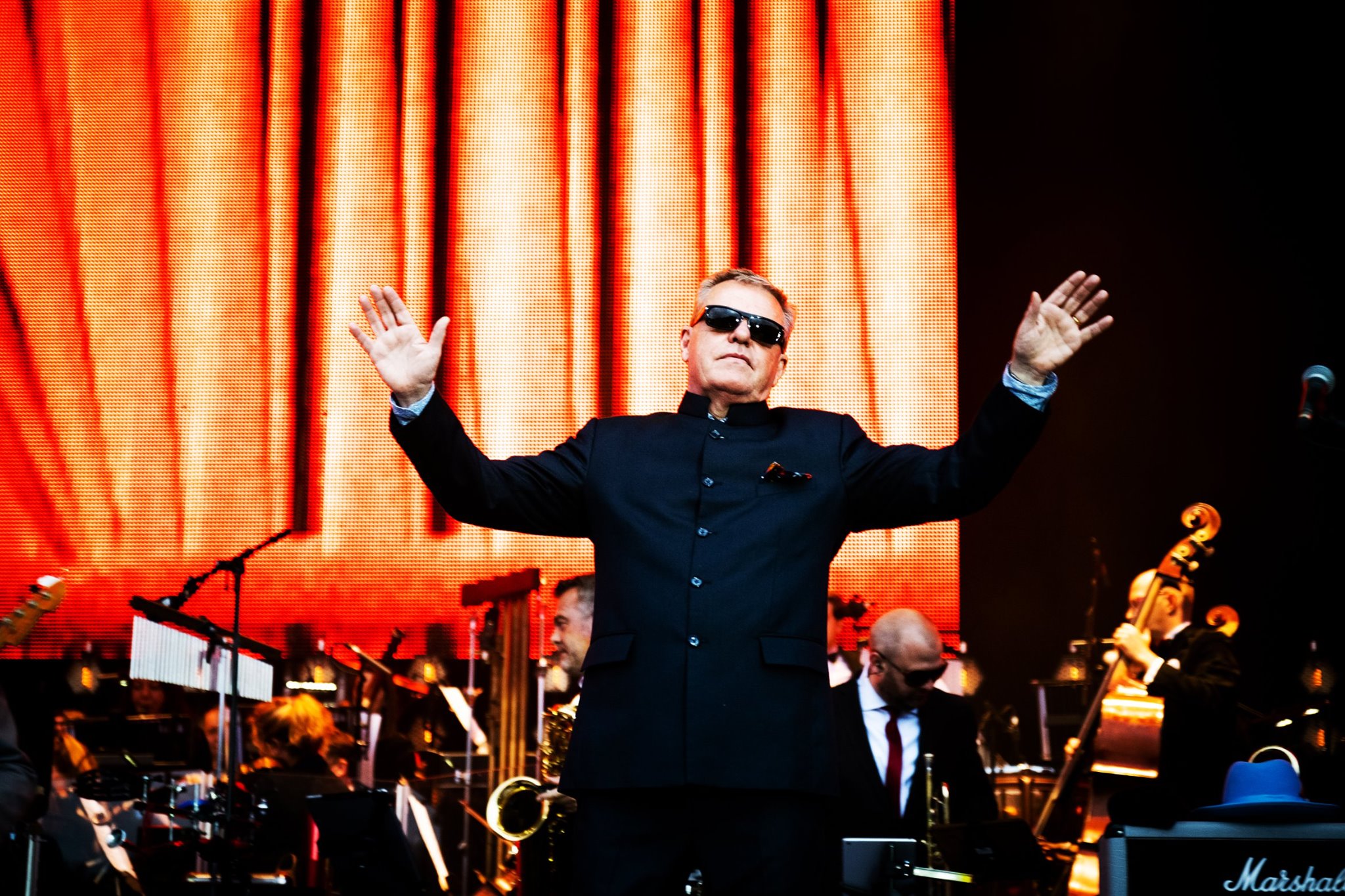 Once the stage was marked up (we only just fit in the room, I had to breath in to get to the monitor desk!) and the band was set up we started putting together the audio gear. Everything went reasonably smoothly and soon we were able to start line checking. One very important issue that Miles identified was that because the recording guys weren’t arriving until the third day, we needed to put a dummy load on their part of the split to make sure that our gain levels stayed the same throughout and didn’t drop when they connected their desk. To that end he supplied a bank of preamps that we connected from the outset to ensure nothing wavered.

Day two went well – it was pretty much business as usual with the regular band, although one thing we did do was install a Perspex acoustic screen behind the drums to help reduce the inevitable spill that would be picked up by the strings. On the morning of day three the orchestra rehearsed on their own which gave us an opportunity to line check them and start building the mix. In terms of microphones, we used AKG C414s as overheads for the percussion and Beyer M88s on the timpani. The brass all had Shure Beta 98Hs, the woodwind and strings all used DPA 4099s and the harp had a pair of Schertler DYN pick-ups. At FOH Dennis sub-mixed the orchestra into eight stereo stems comprising high strings, low strings, hi horns, low horns, woodwind, percussion, harp/keys and FX (i.e. a selection of reverbs) which Ian incorporated into his mix. In monitor world I had Paul supply me with five stereo stems comprising percussion, brass, woodwind, harp/keys and strings which gave me maximum flexibility to send whatever was needed to wherever.

In the afternoon we finally got the band and orchestra together and the main issue we had with the monitoring was the spill from the drum kit (despite the Perspex barrier), which was most noticeable for those band members with in-ears who were keen to hear the orchestra, but ended up with muddy mixes. Being an enclosed room this was always going to be a problem. The simple solution was to turn down the orchestra but I tried to feather those mixes so that there was more of the instruments further from the drum kit and less of those close in order to convey at least an impression of what the orchestra was doing. 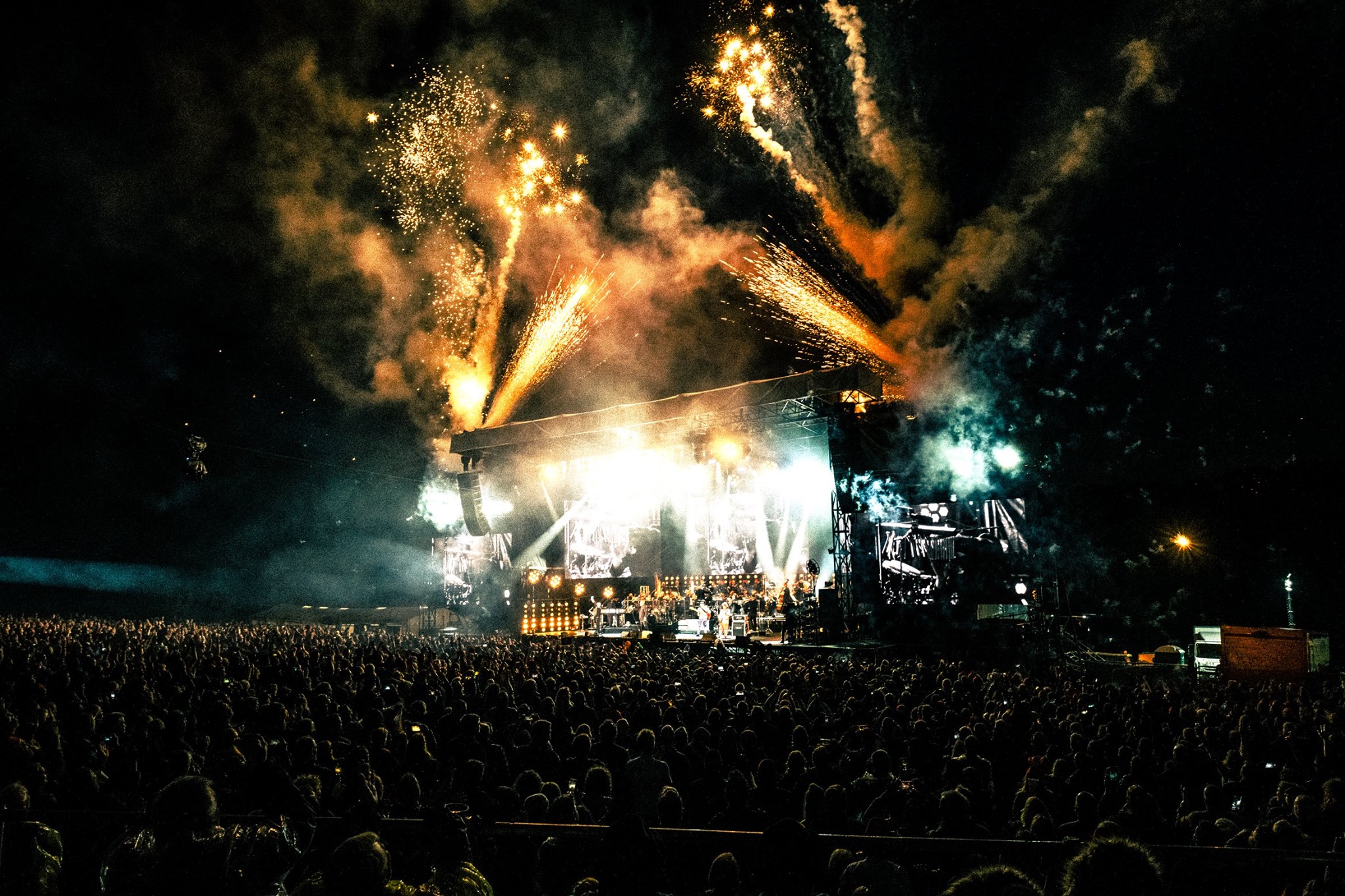 On the day of the show, the load in was delayed because of issues with getting the truck on the dock – which was the last thing we needed – but somehow we managed to get everything set up and ready in time for the sound check. We were fortunate to be able to have a full run through of all the songs featuring the orchestra which gave us ample time to make sure everything was functioning as it should. There was still an issue with spill from the drum kit but the risers (which elevated the orchestra behind the band) and the open air stage helped make it manageable.

I am both pleased and proud to say that the show went off without a hitch. It sounded fantastic and everyone was really happy with their on-stage sound as well as the overall performance – all of the hours of planning, preparation, practice and perseverance paid off brilliantly. I didn’t really relax until the last song of the set when the orchestra donned fezzes and launched into a spirited rendition of “Night Boat to Cairo”, leading to a fireworks display which capped off an intense week and a truly spectacular show.

The secret to successfully completing an ambitious project like this will always be to assemble the right team of people. Without the help of Paul, Dennis, Pete, the experience of Ian and the backing of SSE it could quite easily have been a total nightmare, but their combined skill and experience ultimately made it a surprisingly straightforward event.