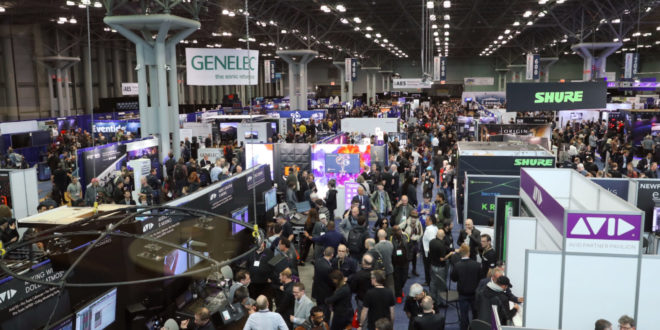 Under the banner ‘Inspire’, the pro audio industry returned to New York City’s Javits Center for four days this month as leading audio innovators shared their knowledge and experience alongside the latest gear.

“The program rocked, and the exhibits were packed with people. Everyone was very excited to be there,” said Agnieszka Roginska, AES New York 2019 co-chair and AES president-elect. “No time in AES’s history has seen a more diverse, innovative and forward-looking program.” Convention co-chair and AES secretary Valerie Tyler added, “We expanded the comprehensive technical program to include more genres, a broader range of new technologies and a wider breadth of voices than ever before.”

“We’re so proud of the team that came together to make this convention a reality,” said Jonathan Wyner, the third of the Convention’s co-chairs. “From the technical program to the exhibition hall, the interests of every attendee were met. Expanded topics drew new attendees and let long-time attendees expand their horizons.”

The Convention’s wealth of opportunity – more than 750 of professional audio’s leading innovators presenting in the more than 330 sessions in the All Access Technical Program and the 130 sessions on the Exhibition Hall’s Inspiration Stages and in its topical Theaters, alongside 236 exhibiting brands – was evident in the registration numbers, according to Colleen Harper, AES executive director. “Registration for the Audio Engineering Society’s 147th International Pro Audio Convention again topped 14,000,” she said. “That includes a 20% increase in individuals opting for an All Access badge for the full Technical Program. The AES and our events are more relevant than ever to an industry where technology and its application are in a constant state of change.”

Console maker API’s presence at AES New York 2019, where the company celebrated its 50th anniversary, was felt. It was “a great show for API,” said the company’s owner and president, Larry Droppa, “aided by the museum display in our booth, which provided not only a history lesson for the younger generation, but a chance for our contemporaries to reminisce over the ‘glory days’ of tape-based recording. Attendees were enthusiastic about the state of the industry. We were particularly pleased with the number of student groups and younger audio engineer/producers who value the listening process as much as the advances in technology.”

Showing further appreciation for AES’s nurturing of the audio professionals that are the future of both the Society and the audio industry, Genelec’s marketing director Will Eggleston summed up AES New York 2019 by declaring, “The AES audio community is alive and vibrant, indeed. It’s so great to see so many enthusiastic young audio professionals participating and doing so many cool things.”

On the AES event calendar for 2020 are the AES Academy in January in Anaheim, the AES Worship Sound Academy in Nashville in March, the AES Vienna 2020 Convention in May, the Audio Educators Conference in Murfreesboro/Nashville in July and the AVAR Conference in Redmond, Washington in August. AES New York returns to the Javits Center October 21 – 24, 2020.