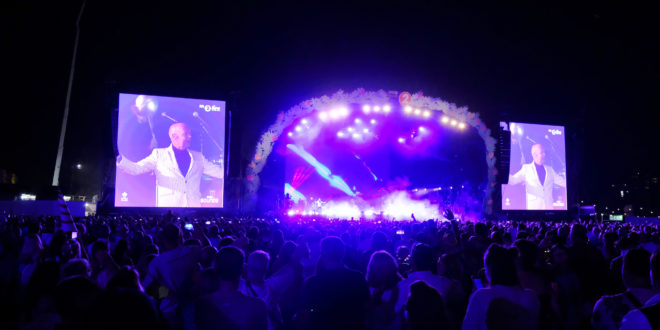 Hyde Park played host to the final weekend of its long season recently, with Proms in the Park on the Saturday making way for BBC Radio 2 Live in Hyde Park the following day.

This also brought the curtain down on a successful summer at the Park for Capital Sound, and their MLA PA from Martin Audio, following its ten-day stint at British Summer Time two months earlier.

The following day BBC Radio 2 presenters introduced a number of acts, including headliners Pet Shop Boys to the 50,000-capacity crowd.

The main PA hang provided by Capital Sound comprised 16 x MLA and an MLD Downfill per side, and 12 x MLA on each flank as sidefills. Sub frequencies were reproduced by 26 MLX subwoofers in a broadside cardioid array — 17 forward facing, and nine on top reversed. On alternate sub stacks was a W8LM Mini Line Array element, with a further stack of three W8LM on each side acting as ‘wing fills’. Up on stage, artists could draw their reference sound from Martin Audio LE1500 wedges, supported by WS218X side fills, while away from the stage 12 x Martin Audio DD6’s provided reinforcement at the VIP interview stage outside, with a further 12 x Martin Audio F8’s on duty inside. 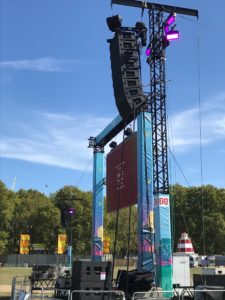 Further back down the field, there were four delay rings giving a total of 12 delay masts. Two points were set 350 metres from the mix position, comprising eight Martin Audio MLA Compacts, to extend coverage to the main entrance gate but avoiding spill. Four positions were equipped with three MLX in cardioid pattern, while the furthest ring ensured the desired SPL levels could be reached while containing the offsite sound.

Quo’s long-serving sound engineer, Andy May, had some positive words to say about his experience at the sound desk. “Achieving a dynamic mix to a very large audience is never an easy task, but the system supplied by Capital had been perfectly designed and set up really well,” he enthused. “Coverage across the entire area was very impressive, so I knew the whole audience would get the intelligibility and dynamic punch that was required.”