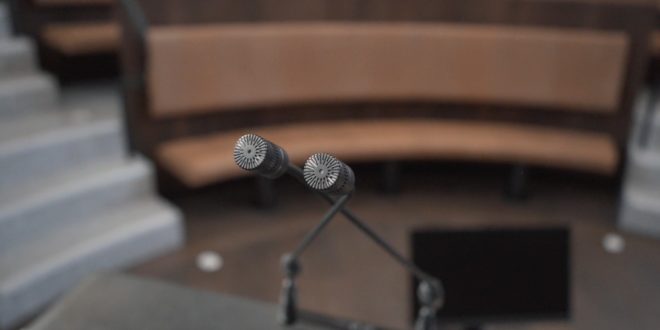 A selection of DPA microphones are now being used for events such as lectures, panel discussions, filming, live streaming and podcasts at London’s Royal Academy of Arts.

From its unique double-height dimensions to the extensive use of reflective marble surfaces used during its construction, the Royal Academy of Art’s new Benjamin West Lecture Theatre in London presents some unusual acoustic challenges, so it was important that the right microphones were chosen for this space.

“DPA microphones have proved to be the ideal solution because they allow any technician or engineer to jump in and achieve quality sound,” said Benji Fox, AV Events Manager at the RA. “We are using a selection of the company’s products in a number of different ways, including acoustic mics for lectures, belt packs and lapel mics for panel discussions and the new 6066 CORE Subminiature Headset Microphones for smaller panel discussions, filming and live streaming.”

Opened in 2018 as part of the RA’s Burlington Gardens’ landmark redevelopment to mark its 250th anniversary, the Benjamin West Lecture Theatre signals a new stage to the RA’s heritage of rigorous and lively debate, hosting events such as the Festival of Ideas. The Lecture Theatre’s DPA inventory now includes two 4018 supercardioid microphones, which are positioned on custom lecterns at the front of the room.

For panel discussions, the RA is using DPA 4080 miniature cardioid microphones that are usually attached to panellists’ lapels. Many of the RA’s events are recorded for archive and for podcast, with production handled by the in-house AV team.

“Whichever DPA mics we choose, from 4080s or our recently adopted 6066 Headset microphones, we know we will be making the best possible source recordings that will need the minimal amount of post-production,” Fox added. “The proven track record of DPA mics at the Benjamin West Lecture Theatre means that I am now looking to expand the RA’s stock across other sites and for a variety of specialised applications.”