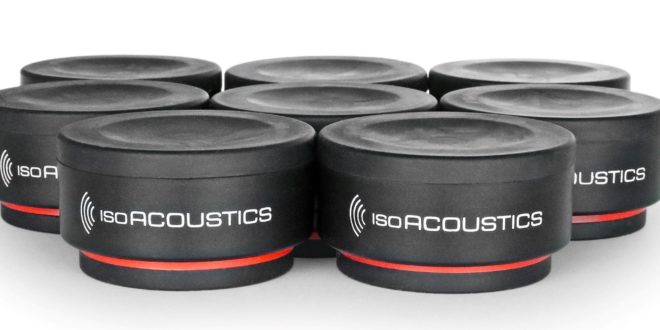 It’s amazing how, even after spending vast sums of money on a studio build, there are always things that can be improved. I can remember on more than one occasion, walking into a real smart studio to find odd bits of acoustic foam and even books wedged into place to cut out reverberation, particularly under studio monitors. I’ve done it myself too, finding odd ways to lift speakers up a fraction to get a better sound.

That’s the idea behind IsoAcoustics’ Iso-Puck Minis. These are small, circular pods that fit under monitors to separate them from their supporting surface. The idea is to create a sharper (as in, more precise) audio image and cut down on reflections or interference from the stands, console or desktop that the speakers are on. I find I do a lot of audio work from home these days, with all the convenience of a laptop and compact gear, but that means less than perfect acoustics and a desk that I know is adding its own little something into any edit or mix.

So there was an element of personal curiosity when I opened the small box containing eight Iso-Puck Minis (it looks like a box of chocolates the ambassador might spoil you with). Their construction is a mix of plastic and rubber and each one is made of two main sections, one sitting inside the other. It means they float ever so slightly, to absorb vibrations like a damper – you can see this working if you squidge one between finger and thumb (each one fits in the palm of your hand).

I used them under my own monitors and their application couldn’t be easier, you simply place one at each corner of the speaker. That’s it. I wasn’t expecting biblical results but there was a noticeable difference in the sound. It was slightly sharper and clearer and more in focus. The boominess that I was aware of before from my less-than-perfect setup was reduced. I was listening to a spoke-voice project with interviewees recorded in different locations with varying acoustic qualities. Those differences, which I am aware of more when listening with headphones, were now clearer through the speakers (as they should be). Previously, my listening environment had been creating a level playing field that was a distortion of the real audio.

So far, so impressive. I then did a rather odd thing and turned my monitors on their sides. There are plenty of circumstances where studios do place speakers in landscape mode, for all sorts of reasons, so I thought it was worth a try to see how they sounded. I’m glad I did, as the results were even more pronounced. I’ve since been writing this review with audio playing literally at my left hand and the longer it runs, the more I can hear the Iso-Puck Minis at work. By separating the speakers from the work surface, I am genuinely more aware of the audio on its own.

The Iso-Puck Minis aren’t just designed for monitor use, they can also be placed under amps, turntables, mixers and mic stands. In fact, in any situation where you want some extra separation between surfaces and equipment. Obviously, they can’t work miracles and there’s no substitute for having a good studio. But there are plenty of scenarios where you want that extra 5 per cent, where you need to just tweak the sound. And there are equally situations where you are outside the studio and need help to improve the sound you’re either recording or monitoring (or both).

I can recommend the Iso-Puck Minis. Given you could put eight of them in a kit bag with no fuss or slip them under monitors and then forget they are there, they have to be worth a try. In the fight for better sound, they’re a mighty little dagger in your arsenal.

> Each puck supports up to 6lbs

> Easy to position on any surface