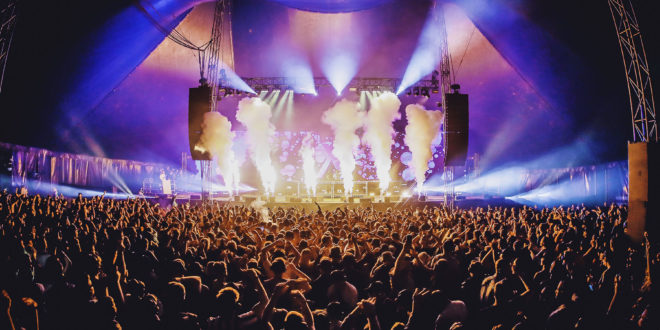 Technical production specialist Adlib supplied audio systems for four arenas at Creamfields 2019 – one of the best-known and most popular dance extravaganzas worldwide.

Taking place over the August bank holiday weekend, Creamfields attracts 70,000 dance fans each day for three days with a star-studded DJ line-up representing the diversity of dance culture. Merseyside-based Adlib worked directly for creative production specialist LarMac LIVE and their team led by Ian Greenway. The audio team proposed a creative ‘end-fire’ sub-bass system design as a solution to keep the extensive low-end content well-contained and within the boundaries of each respective stage.

Music in the The Pepsi MAX Arena was enjoyed by fans through a CODA sound system, comprising six AiRAY boxes per side, each of these stacked on top of four SC2 subs.

On the ground along the front of the stage were another 12 x SCP subs arrayed in six stacks of two in the ‘end-fire’ configuration to help keep as much bottom end on the site and minimise spillage. FOH & monitor control for this stage was a DiGiCo SD11, and Adlib’s crew were James Claridge and Matt Gadsby.

Meanwhile, ensuring the Adlib sound was perfect in the Sexy by Nature arena was Hassane Es Siahi at FOH and Steven Selby on monitors. The large tented space offered flying facilities and the chosen PA chosen was an L-Acoustics K2, with 12 x K2 elements for the main left-and-right hangs working in conjunction with two flown delay arrays further down the tent with four K2s in each. The delays provided more efficient coverage across the large space and assisted with the level control, so that the main system didn’t have to be driven so hard. On the ground, 20 x L-Acoustics KS28 subs were rigged in 10 stacks of two in an end-fire array. A selection of fills ensured the front edges of the barrier were properly covered with four ARCS per side, and four Karas did the front fill, plus six Kara each side as ground-stacked outfills. The desk was a DiGiCo S21 running with a DiGiCo D2 stage rack.

The 4-king-pole tent Axtone arena was ideal for a flown audio rig, which comprised 12 x CODA AiRAY a side each with two ViRAY down at the bottom of each hang. In this rig, Billy Bryson was able to fly two sub arrays each consisting of 8 x SC2s directly behind the main two PA hangs for greater low-end steering. On the floor were 20 x SCP subs set up in 10 stacks of two, again in the specified end-fire configuration. Coda APS & ViRAY were deployed as infill and outfill. The FOH console was a DiGiCo S21 fed by a D2 rack, and for monitors there was an A&H SQ-6 running via an A&H dLive DX32 Expander stage rack.

The Silo, which made its Creamfields debut in 2018, is a coliseum-style cylindrical chamber with a 30-metre dancefloor in the middle and towering viewing platforms – club style – on a second raised level. Complete with a 360 degree ‘wall’ of sound, this was created to give festival-goers an ultimate 360-degree sensory experience, evoking the spirit of the ‘underground’ with a slick production presentation. The DJ booth was also positioned on the first floor along with the audio and lighting control positions and four main speaker locations, so some lateral thinking was required for the sound design.

Four stacks of CODA ViRAY each with an SC2 sub at the bottom were chosen as the main arrays, all ‘ground stacked’ on the upper level. Four stacks of three SCP subs were carefully positioned on the lower level in pre-planned clearings in the scaffold structure. To cover the gallery areas open to the public, CODA HOPS speakers were rigged on vertical mounting brackets. This system was run via a Midas PRO2 console with a Midas DL251 stage box. A pair of Adlib MP5 wedges and a selection of Shure UR2 hand-held mics were on hand for guest vocalists.