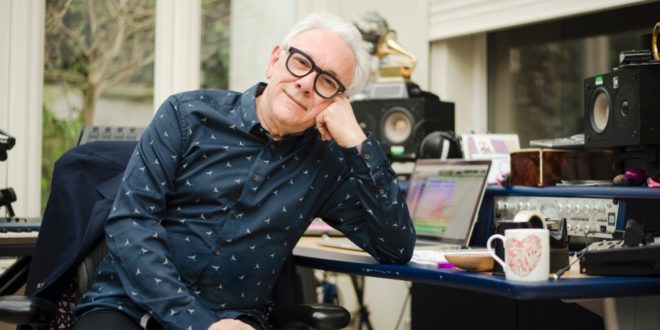 The Innovation in Music conference, now in it’s fourth bi-annual slot, has announced that legendary producer, Trevor Horn, arguably ‘the man who invented the eighties’ will deliver one of the keynotes at the December conference at the University of West London in Ealing, London.

Other keynote speakers include Bruce Woolley, a contemporary of Horn and now a futurist performer and legendary songwriter. Woolley, in addition to songwriting is a composer, performer and music producer – with many artist credits, including Cher, Grace Jones, the Orb and Nicki Minaj. He is a Theremin enthusiast, and has recently researched and presented a new keynote “Video Killed the Radio Star – How the Future began” – exploring the origins of Electronic Music and the evolution of the record industry (as a whole).

This year’s innovation keynote will be delivered by Matan Berkowitz, an interdisciplinary artist & entrepreneur. Berkowitz lives in the nexus of art, technology and positive impact. His award-winning inventions translate physical signals (such as brainwaves, heartbeats and movements) into music, turn everyday objects into instruments and have been displayed at museums, galleries, events and stages worldwide.

Innovation in Music will also host several performances headlined by the Radio Science Orchestra. Using Dante/RedNet technology, the musicians will be performing together from different spaces around UWL, and will be simultaneously mixed differently in a number of recording studios. They will be joined in real time by further remote musicians, playing live from Edinburgh Napier University via LoLa technology with 2-way audio-visual synchronisation. All of these performances will be spatialised into a 3-D stage mix and supported by VJ-ed video coverage of all the action. The various mixes will be multiplexed together in real time by Matan Berkowitz using his self-designed gestural controllers.

Alongside over 60 accepted academic papers that define the cutting edge and future of music technology, performance and business, the conference will host a number of demonstrations, audio installations and workshops including Music for Goldfish, The Ambisonic Guitar and the IKO multi-speaker system. There will also be book launches by both Dr Paula Wolfe and the legendary East 17 producer, Dr Phil Harding.

The Innovation in Music conference 2019 at the University of West London – which will take place from 5-7 December – is sponsored by Focusrite Rednet and Jigsaw 24.