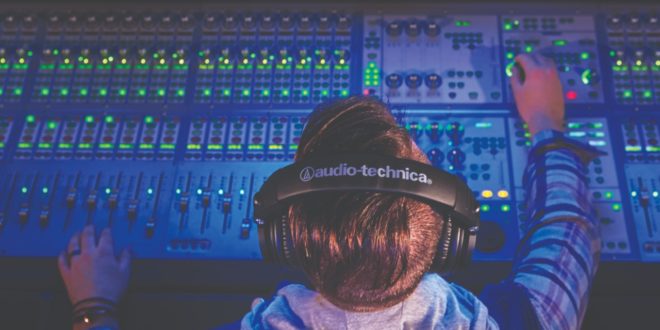 What kind of trends are you seeing at the moment?

In the pro domain, headphones are being used for many different applications. There’s those for general studio mixing purposes – here we’re not seeing too much of a shift in terms of technological trends, other than on the immersive side, which I’ll come to later. Another application we’re seeing is truly wireless headphones for intercommunication. The referees for professional football have the small ones from Intricon, which is basically a wireless receiver in an earpiece, but for long distances. This is something that is very specialised.

We’re also seeing some headphones dedicated to immersive audio. Beyerdynamic released a headphone a few years ago which had a sensor on the top which panned the audio when the user moved their head, which is a rather interesting one.

What do you think companies can do to maintain their competitiveness in this area?

Immersive formats is where audio is really going. The Broadcast Union decided that 5.1.4 should be the next format, so four speakers on the top for 3D sound, two at the front and two at the rear. Having this on headphones with two ear cups is a problem of course, but there are processors from companies like KLANG which could play a role in immersive 3D formats like this. They all rely on what we had in the good old days which is phase information. It comes down to time domain audio quality, something which most people don’t look into too critically. There’s a frequency response curve which could be analysed however this doesn’t make much sense on headphones because they pretty much rely on how the user’s head and ears are shaped.

I think being accurate in the time domain is the key to future success when it comes to the pro sector, and manufacturers need to make sure they’re maintaining an accurate transient response in their headphone technologies. The M50x which we’ve had on the market for a few years does this very well, and many have described it as a very precise headphone with an accurate frequency response. The same goes for the M60 and M70s, the latter being highly accurate for critical mixing and listening purposes.

To what extent do headphones have an important role to play when it comes to mixing for immersive formats, and what technologies has Audio-Technica most recently been developing?

It has become clear that the headphone technology needs to get even more precise if it is to ably serve immersive audio formats. Audio-Technica has come up with some new technologies which are currently being used on the consumer side of the headphone business. This is a direct digital drive, which basically means we’re skipping the D/A conversion in the headphones in order to power the headphone drivers with digital controls. We do this by not using a volume over time logic, but with a velocity approach. We measure how much the amplitude changes from one sample to the next, and move the diaphragm forward or backwards depending on the velocity value.

The digital drive gets rid of all distortion that could come from the amplifier, because we’re just driving speed forward or backwards. The outcome of this means we get a very precise headphone that eliminates the distortion factors that a traditional approach would have. It is an active headphone by itself because it requires the energy to come from the inside, however this might make it a little less pleasing to the professional user, so there is still some work to do. In terms of digital, some of the infrastructure is not yet clear and I’m not 100 per cent certain where that journey will go. We certainly have the technology in our hands – we just need to see where we can utilise it.

How do you expect the technology to evolve further in the future?

Getting rid of the headphone amplifier is something that could prove to be an interesting approach, because it’s kind of a bottleneck and you’re always relying on someone else’s technology. Digital consoles need to be more flexible with their outputs so that they can work with digital headphones in a more streamlined way. However – as I said in our last Tech Talk discussion about wireless – as long as our ears are analogue, then analogue is the future. Headphones need to sound good, and to take advantage of immersive tools we just need to make certain we’re accurate in the time domain, and as long as we can maintain that, maybe there’s no need to go digital and over-complicate things.

It’s a tricky field because it comes down to something that is very well established already. Headphone technologies have been around for a while and there’s not really been many major changes besides Bluetooth and other transmission technologies between devices. I think we’ll soon see a proper digital headphone interface come to life, but without sounding too conservative, on the pro side I don’t think there’s much that needs to change!