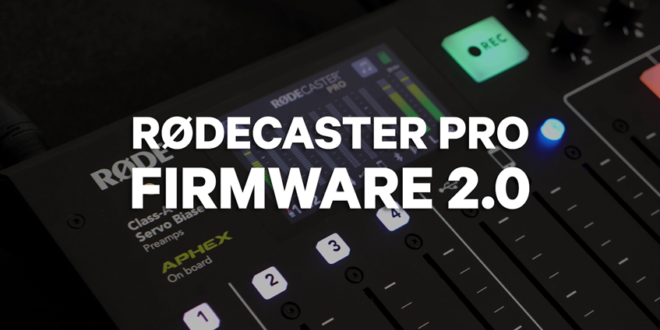 RØDE Microphones has announced firmware version 2.0 for the RØDECaster Pro.

Version 2.0 follows on from updates earlier in the year, which introduced multitrack recording amongst other handy features.

> Saving ‘Shows’ and Settings: Users can now save and load ‘Shows’ via the RØDECaster companion app, which is essentially a snapshot of all sounds and settings. Settings can also be saved on their own.

> Podcast Transfer Mode: Allows users to transfer podcasts from their on-board microSD card to a computer directly from the RØDECaster Pro.

> New Sound Pad Functionality: New features include a sound pad indicator on the home screen that tells users which pad is playing and how long until it finishes, easier access to the sound pad configuration screen, more on-board control, and a new “Pause” playback mode. On top of this, users can now save eight banks of sounds to their RØDECaster Pro (64 in total)

> New-Broadcast Ready Features: Users can now access a number of features often found in professional broadcast consoles, such as pre-fade listen mode to preview a channel before it is faded in, the ability for the ‘host’ to chat with callers on the Bluetooth, Smartphone and USB channels “off-air”, and the option to automatically mute the monitor outputs when faders are open to prevent feedback.