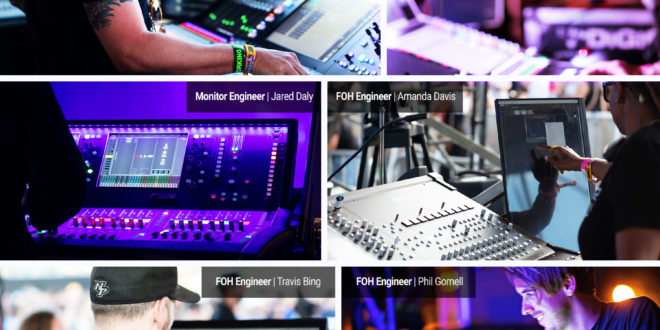 Plugins from Waves Audio were employed by live sound engineers for a variety of performers in diverse setups and consoles throughout Lollapalooza 2019.

Now one of the longest-running in the United States, the iconic festival brings in close to half a million people each year, taking place over four days in the heart of Chicago’s lakefront. The 2019 lineup featured some of the world’s biggest artists across hip-hop, electronic and every flavour of rock.

The sound engineers for festival headliners Childish Gambino, Twenty One Pilots and J Balvin, plus top-drawing acts like Janelle Monáe and Kacey Musgraves, have come to rely upon Waves plugins for their live mixing needs.

Mixing the sundown set on Friday night at Lollapalooza, Janelle Monáe’s right-hand woman, front-of-house engineer Amanda Davis, has been touring for over six years and has been a Waves user for “as long as I can remember.” Davis likes to keep it concise when it comes to effects processing, running the Waves MultiRack plugin host with a SoundGrid Impact Server-C through DMI cards on her DiGiCo SD10.

A 17-year veteran in the live sound business, Charles Izzo has been using Waves tools professionally for over a decade. Mixing monitors for Donald Glover a.k.a. Childish Gambino, Izzo is constantly optimising his effects chains, going for that solid dynamic sound that he feels only studio classics can deliver. “The Studio Classics Collection bundle, with the Waves SSL and API plugins, is used on pretty much any show that I mix. Having the colouring and responsiveness of those plugins makes a huge difference for me, whether it’s at FOH or monitors.”

FOH engineer Travis Bing, helming the boards for six-time Grammy-winning country singer/songwriter Kacey Musgraves’ show, talks about the vocal processing: “My chain is a Puigchild 660 into F6 into C6 into the NS1 Noise Suppressor, into parallel group compression, and finally into the PuigChild 660 compressor again,” he said. “PuigChild is a constant for me on vocals, and the F6 has become a strong go-to as well: it’s like the C6 on steroids – so versatile and can achieve so much so quickly. I use the PSE (Primary Source Expander) on my background vocal groups. I have five background singers, so I’ve got to do something to suppress those open mics whenever I can.”