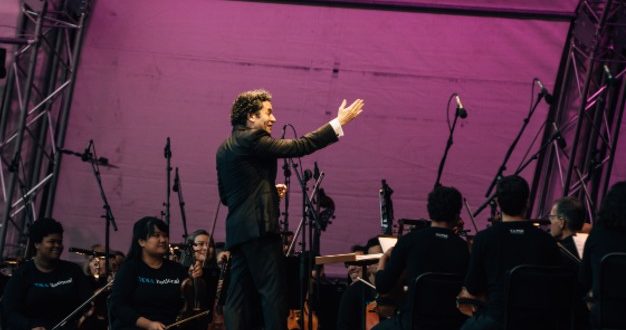 The Warehouse provides Adamson system for the Edinburgh International Festival

The system consisted of E15 line array loudspeakers on main left and right hangs, S10 loudspeakers for under hangs, S7 for front and side fills and E119 sub bass loudspeakers all powered with Lab.gruppen amplifiers running Lake Processing. The show was mixed on a Digico SD10, while microphones included over 60 Neumann KM184 as well as a selection of DPA, Shure and Sennheiser models.

Aberdeen Standard Investments Opening Event: LA Phil at Tynecastle celebrated the start of the 2019 International Festival and was attended by a capacity crowd of 15,000 people.

A stage replicating the Hollywood Bowl, where the LA Phil famously perform every summer, was recreated in Tynecastle Park, the home of Hearts football club. This year’s Opening Event featured classic movie music from the Golden Age of Hollywood by Korngold, Herrmann, Waxman and a selection from the best-loved film composer on the planet, John Williams.

Front of House sound was mixed by hire manager and sound engineer Douglas Martin, who had flown to Los Angeles the previous week to attend a performance and meet the orchestra at The Hollywood Bowl. Martin has extensive experience of mixing orchestras and works for many leading producers worldwide. He was joined at Tynecastle with crew from The Warehouse that consisted of Aidan Thomson, Graeme Brown, Simon Meadows, Marc Freeman and Kieran Blair.

The sound mix received wide acclaim from both the LA Phil, the audience and attending media. Derek Blair, director of The Warehouse, commented: “We were delighted to be asked to do this concert and knew right from the start what a very special event this was going to be. The LA Phil are a really exceptional orchestra with a very talented and charismatic conductor.

“For this unique event the sound had to be equally spectacular, I think this was achieved very successfully with Douglas mixing the sound and the Adamson loudspeaker system. The Opening Event always puts a huge spotlight on Edinburgh, it’s a world-class event that we are so proud to be part of.”