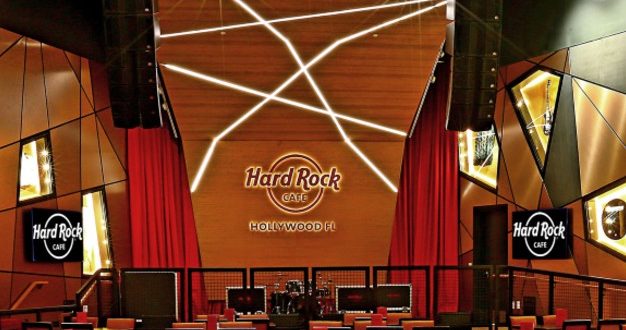 The casino floor’s ambience can affect the acoustics of a restaurant and music venue and this room was designed to have a live acoustic character.

“It’s a bit of a challenging venue for audio because of its lively restaurant environment. It requires a delicate balance between the interior design and the production needs of achieving great live stage sound,” said Tom Knauss, principal consultant at KMK Technologies, the audio consultant firm hired by Hard Rock to design the new system. “Hard Rock places equal importance on how the room’s interior looks with regard to high-level design and how excellent the room sounds during shows.” 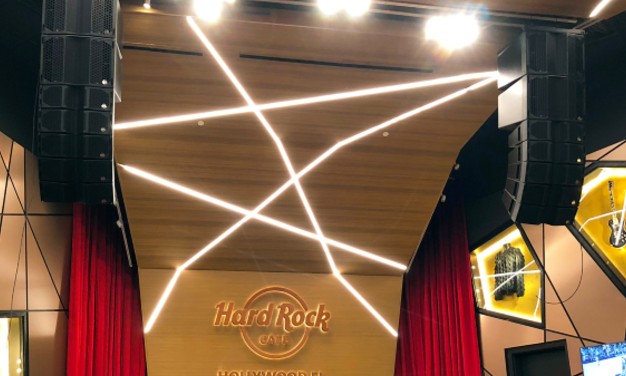 According to Josh Sadd, chief design engineer at Clair Brothers, “The stage is completely surrounded by a restaurant and bar so one of the biggest challenges was maintaining a consistent sound for someone sitting at a table right in front of the stage, at a table twelve feet away, and someone else at a table in the back, let’s say a hundred and twenty-five feet away. That challenge was well met by the capabilities of this C8 system and the particular ability for us to control the sound in the vertical plane. This is due to the new component and waveguide type that we’re using at Hard Rock Cafe. In that regard, maintaining a balanced sound throughout the room, which would otherwise be difficult using a different speaker system, was easily achieved based on our array technology.”

“They say in sound it’s better to have more than you need than to need more than you have,” added operations manager Ed Sullivan. “At Hard Rock Cafe there’s no chance of the latter. The system was designed with plenty of headroom, and the Clair C8/C118 PA has met or exceeded expectations in every respect. The main system was assembled and tested at the Clair Brothers facility in Manheim, Pennsylvania, and the Lab.gruppen amplifiers, with Lake Processors, were configured and tested along with them.”