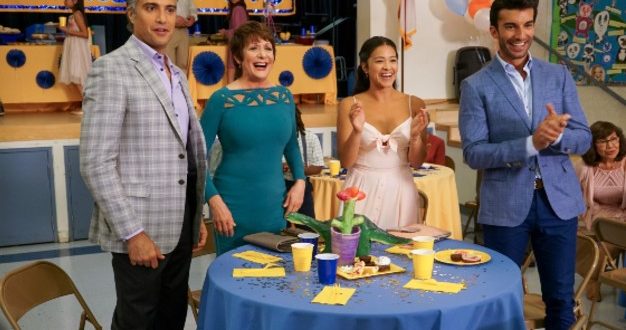 Jessie Anne Spence, ADR Supervisor on romantic dramedy and satirical telenovela Jane the Virgin, opens up about gender equality in audio post and her role on a show that heavily promotes women both on and off screen…

It’s probably no secret that the CW hit series Jane the Virgin has been championing women throughout its five season history. From Gina Rodriguez’s tireless work with young women to the countless articles punning that Jane’s “no virgin” to gender equality; and I’m here to tell you that it’s all true. I’m the ADR Supervisor on Jane the Virgin, and a proud member of the heavily female populated team. What’s even more rare than being a woman in the audio post world is that I have been working with the show since the beginning.

Let’s back up a few frames. Growing up in Michigan, I never thought I would move to Los Angeles and work in entertainment. While attending The School of the Art Institute in Chicago to become a graphic artist, I became interested in internet streaming technology and started hosting and engineering a radio talk show that continued for eight years. The show, which aired in multiple markets, opened up the possibilities of work in entertainment. Leaving the commercial artist career behind, I moved to LA to pursue a career in music.

Funny enough, I got started in the post audio world accidentally by doing ADR for a producer friend I lived with. I was writing music at the time and had a little home studio. He came running in one day and said, “We need to re-record this whole scene! The actress is on her way!” I was blindsided and had no idea what I was doing. So, I had to figure out how to do ADR in half an hour and fell in love with the process right then. I don’t know if it was working closely with the talent or if it was the meticulous technique needed to seamlessly marry the VO with the on-screen speaking parts that I loved, but I decided then and there that I wanted to go into sound for TV rather than continue in music.

After changing careers, I did some internships while trying to meet people in the industry. The way I fell into King Soundworks is quite the Hollywood story. I was at a Thanksgiving party at my yoga instructor’s house in La Canada, talking to her daughter about my new interest in audio post. She recounted babysitting for a man who, if memory served her, had something to do with post production. She then introduced me to David Fluhr, Stage A mixer at Disney and president of the Cinema Audio Society. Bam! I worked CAS for a few years before he introduced me to Greg King. The funniest part to me is that I saw an ad for King Soundworks in The Hollywood Reporter while I was interning and instantly wanted to work there. It’s interesting how things come full circle.

When I started at King Soundworks I had little experience, but the founder Greg King believes in mentoring and nurturing the talent he hires. We’re given opportunities to learn and try out different aspects of the job while he guides us to an audio path conducive to our strengths. Greg recognised that I love working with people and different personalities, as well as garner great performances. He’s been helping me cultivate these skills since I first started at King Soundworks.

I’ve never considered myself a feminist, but as I continue through this male-dominated industry I notice the need for women to be and become more visible in this line of work. We need to increase the amount of women in entertainment without hiring them just because they’re women. We need to make women being in the Hollywood workforce the norm. Speaking out helps, going to events helps, writing articles like this helps. OK, let’s get back to why Jane helps.

Jane the Virgin is my baby in the post-production world because I’ve come into my own while working on the show. I started as an assistant in season one and by season four I was the ADR Supervisor. I was lucky. I got to grow with a show and work with the original ADR Supervisor, Darren King, who ended up not being able to do the final seasons. A show that heavily promotes women both on and off screen happened to also be my chance to rise through the ranks. The powerful actors and characters you see on screen are backed by an intelligent and talented crew. It’s because of shows like this that women are rightly becoming more prevalent in the industry.

So what do I do exactly? Being an ADR Supervisor for such a dialogue-driven show means I oversee the dialogue in each episode, from starting a conversation with the on-set production recordist, to doing quick fixes on the last mix day. I decide what we need to re-record off set after the show’s already been filmed, versus what we can cut together in our editing process. One of the more interesting ADR stories involves Jane’s son, Mateo, played by Elias Janssen, who was seven years old at the time. Elias’ two front upper teeth fell out during production, and for a few episodes, had him wear a “flipper” (fake teeth) while filming. Unfortunately, but understandably, the flipper caused some dialogue issues on set. We had to bring him in to ADR the entire episode. The funny thing is, even shooting the lines without the flipper in still didn’t sound like his normal speech, but he was a champion and nailed it.

It’s been an absolute pleasure seeing more women in the audio post world, and it’s true that you need to raise other women up, so I couldn’t end without giving a shout out to the incredibly welcoming women who gave me great advice and helped me feel accepted: Kim Drummond, Jeena Schoenke, Karol Urban, Jesse Dodd, Ann Scibelli, Deb Adair, amongst many others. Without these strong figures I may not be where I am today. I am confident that I will see and continue to work with many female faces.