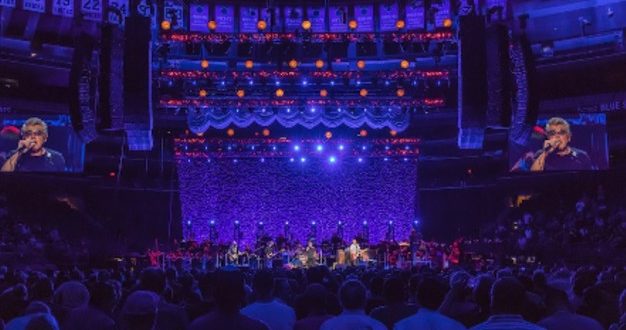 The Who takes Adamson E-Series on 2019 tour

Rock icons The Who are currently between legs of their 2019 Moving On! Tour, which finds them joined by a local orchestra along with Adamson’s E-Series system provided by Cleveland, OH’s Eighth Day Sound.

Chris “Chopper” Morrison, who shares FOH duties with The Who’s longtime engineer, Robert Collins, says that while this is the band’s first full outing to carry an Adamson system, the choice was informed by previous experiences with the E-Series on one-off and festival dates.

In its fullest configuration, the system for the Moving On! Tour is comprised of: main hangs of 15 E15 three-way, true line source enclosures over three E12 three-way, full-range enclosures per side; side hangs of 12 E15s over three E12s per side; 270-degree fills from Adamson’s S-Series, with four narrow-dispersion S10n two-way, full-range cabinets over eight standard S10s per side; and a complement of S10s and S7p point-source cabinets as front fills. The low end is delivered from a hybrid system of nine flown E119 subs per side (in FBFFBFFBF cardioid configurations) and an additional 12 E119s stacked in front of the stage.

“Once we had things dialled in, this system was just shining,” said Morrison. “The last show [of the first leg] sounded great, MSG was terrific, and we’ve consistently been hearing great things about the sound throughout the tour. I love this system.”