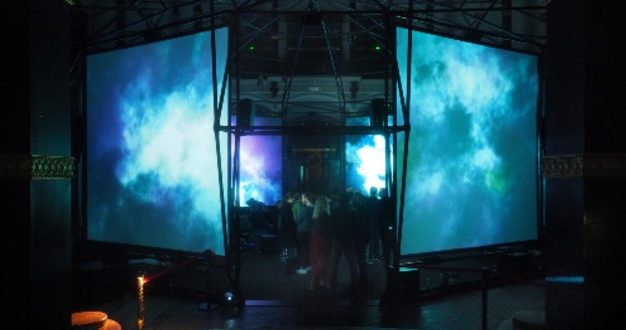 The Institute for Sound & Music has announced the US premiere of the ISM Hexadome installation in partnership with Gray Area Festival at the historic Pier 70 location in San Francisco from July 25 through August 4.

The ISM Hexadome has been selected to travel to the United States as part of the “Wunderbar Together” initiative, celebrating a year of German – American friendship. Wunderbar Together is funded by the German Federal Foreign Office, implemented by the Goethe-Institut and supported by the Federation of German Industries.

“Projects like the ISM Hexadome are important Ambassadors for the Wunderbar Together Initiative. They show us how international cultural co-production boosts creativity, diversity and innovation,” said Andreas Goergen, Head of the Culture and Communications department at the Foreign Office.

The ISM Hexadome will feature the US debut of nine immersive installations, including exclusive live concert performances and world premiere of Suzanne Ciani’s Under the Electric Sea, commissioned and created in Berlin for the ISM Hexadome together with French visual artist AudeRrose.

The ISM Hexadome is an immersive 360° audiovisual installation combining cutting-edge art and technology. It is the first step in the Institute for Sound & Music’s initiative to build a museum in recognition of sound, immersive arts, and electronic music culture.

The ‘Klangdom’, an advanced multi-channel speaker configuration created by ZKM | Institute for Music and Acoustics is hosted within with a visual projection architecture designed by digital media studio, Pfadfinderei and the speakers themselves are built by Meyer Sound. The Klangdom utilises 3D spatialisation software Zirkonium developed by ZKM | Center for Art and Media in Karlsruhe, Germany and Panoramix developed by IRCAM’s STMS research lab in Paris, France.