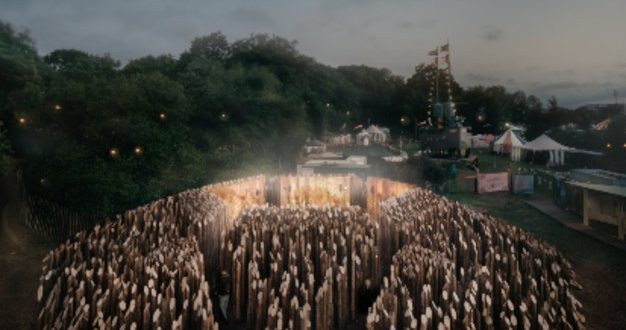 The unique immersive audio capabilities of TiMax SoundHub were in evidence at this year’s Glastonbury Festival where two experiential spaces were driven by the pioneering spatial audio engine.

As a centrepiece for the Greenpeace field, artist Wolfgang Buttress created a new permanent sculptural feature to highlight the plight of bees in the face of existential challenges such as pesticides, climate crises and the lack of biodiversity.

Inspired and controlled by the activity of real bees – a colony of Cornish Black Bees in Michael Eavis’ own beehive to be precise – BEAM is an interactive, multi-sensory and experiential sculpture that, with the help of TiMax and visual specialists RES London, envelopes visitors in immersive soundscapes and 360-degree projection and lighting.

Movement-sensing accelerometers, installed within the Glastonbury farm beehives, stream live vibration data, essentially sounds and vibrations from the bees’ activity, into the BEAM sculpture, to control the musical key and tempo of the soundscape experienced by visitors such that it actually refreshes in real-time.

Live bee broadcasts, multi-channel bee recordings and a mix of multitrack music stems, by artists from Sigur Ross, Spiritualised and Coldcut were interwoven and spatially propelled through the space by TiMax SoundHub. Artists playing at Glastonbury festival were invited to contribute by recording and writing site-specific musical ‘stems’ – these would be added along with the live sound of the bees to the audiovisual experience.

Elsewhere, within the warren of underground venues of The Rabbit Hole SOVA Audio applied TiMax spatialisation to create an altogether different dance arena experience at Funkingham Palace, through a multichannel Funktion-One sound system.

Within this inner world, guarded by Alice in Wonderland inspired thespians with riddles, carrots and magic potions to test wit and determination, SOVA Audio’s George Yankov created a sophisticated and memorable sonic experience for House and disco lovers.

Matching the venue’s dance-floor surround system was an identical monitor setup for the DJs to experience the same dynamically spatialised audio mix. This was essential because George leveraged the TiMax OSC integration to programme various spatial audio movements controllable from an iPad for the DJs to play with.