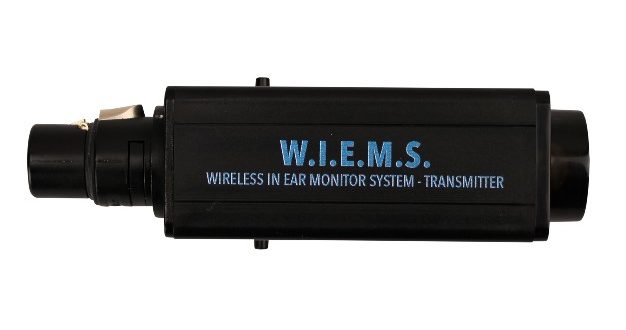 ProCo Sound has introduced its new wireless in-ear monitor system (W.I.E.M.S.), which made its debut at InfoComm 2019.

W.I.E.M.S. is being described as the most compact in-ear solution currently on the market. It features a sleek and simple design, with no external antennas and a simple plug-and-pair setup.

With up to 30 meters of range (line-of-sight) between the transmitter and belt-pack receiver, the W.I.E.M.S is designed for a variety of applications, including live sound, broadcast and film, as well as in educational and other install-based instances.

ProCo’s new W.I.E.M.S. has four user-selectable channels and features a 3.5-mm headphone jack. The receivers are powered by a lithium-ion battery, which is rechargeable with a micro USB. The receiver automatically pairs to the transmitter, which uses the 5.8GHz frequency band, keeping it isolated from the highly crowded 2.4GHz band. Additionally, with a simple XLR cable, the transmitter works through any Dante-enabled wall-plate or drop-snake, such as ProCo’s latest AoIP solutions. 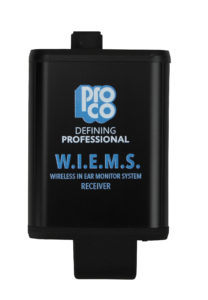 The low-latency (less than 5.6 milliseconds) solution has 24-bit audio quality with a 48KHz sampling rate and transmits from a balanced, line-level output.

“We put a great deal of time and energy into designing a wireless in-ear monitor system that is smaller than anything else of its kind,” said Darius Seabaugh, vice president of marketing, RHC. “We showcased the solution at InfoComm and it has been humbling to receive the incredible initial feedback from industry professionals, especially with regards to the system’s high level of audio quality in such a compact design. It’s a small solution with big capabilities.”