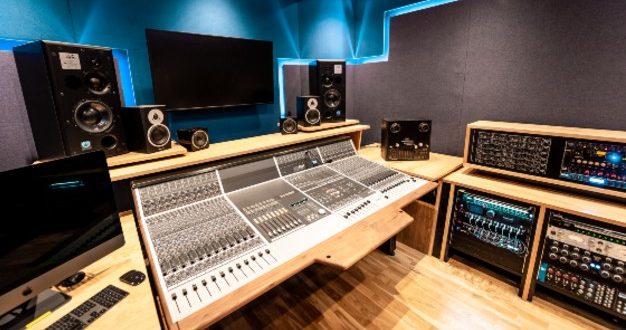 The small, sleepy town of Farnham in Surrey is the last place you would expect to find a brand new state of the art media recording facility, yet the University for the Creative Arts (UCA) – which was named the Sunday Times’ Modern University of the Year 2019 – is now the proud home of such a space.

The building – which was designed by architects Pascal & Watson and boasts a professional dubbing suite – opened at the end of January. UCA’s Film Production course, which has 450 students across five year groups, will benefit the most from the new music and sound spaces, which were curated with help from Digital Garage and Studio People. Over 150 films are produced each year by the students, who can in their second year choose to follow a sound specialism pathway that includes on-set recording, foley, ADR, editing, mixing and design.

Other courses that will have access to the dubbing suite meanwhile include Film & Digital Arts, Animation, Music Composition & Technology, and Computer Games Arts, with a view to expand on this in the future.

Charis Coke, third year coordinator and senior lecturer on the Film Production course, tells me that they started designing the new building before the course even existed. It had been in the pipeline for three years and she jumped on it with eager anticipation from the very beginning: “I’ve been here a long time and it’s great to see it finally come to fruition,” Coke says. “It’s always something I’ve really wanted to do but we’ve never had the space for it – Myself and my colleagues have put forward lots of options over the years but they’ve never really been viable.”

A number of companies including ATC and Avid were brought in to acoustically test the new rooms, specifically the dubbing suite, to make sure they were up to standards. Overall, it sounds like it was a smooth collaboration with the other parties involved, with Digital Garage – who carry out a lot of design for spaces in educational institutions such as this – also responsible for sourcing most of the new gear.

“It’s not Dolby Atmos certified just yet but it’s 7.1.2, which is a massive step up from what we’ve had in the past,” Coke explains. “It’s a brand new facility built from scratch so we’ve been able to design the spaces to meet our requirements, albeit with some constraints.” 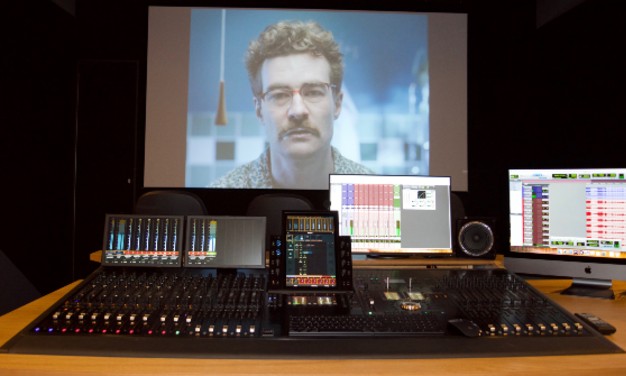 While taking a look around the dubbing suite, I noticed a camera on the wall, which I was told can have its feed broadcast on a big screen in the lecture theatre, so that students can actually see what’s being worked on and don’t have to all be crammed into one room. “The music course leader gets lots of different types of professionals in,” Coke adds. “He’s done this over Skype before but I think if he can get somebody in to work live in front of people, he would want to open that up to more than just music students, so it’s a good way of doing that.”

Coke put forward a paper to Digital Garage which alluded to future-proofing the new dubbing suite (pictured above), and this specification was wholly fulfilled, much to her delight. “I thought that the S6 M10 would be enough, so I was quite surprised when I first came into the room and saw that we had the M40,” she says. “I was expecting a 5.1 setup with the option to go 7.1.2 if the money was ever available. Apparently that wasn’t an issue though, and so suddenly we had an all-singing, all-dancing setup!”

Coke says the whole point of going big with the desk was to give the students an opportunity to use something that’s as close to industry standard as possible. The department has always done this on the software side with Media Composer and the production kit, and so hardware was naturally next on the list.

“I know that when I’m freelancing this is the kind of space I would be using – It’s much more akin to what you would find out in the industry,” Coke remarks. “We’ve been using NUGEN’s Halo Upmix and Downmix tools for a while, but the desk is definitely going to be the main thing, and getting the students to play around with immersive audio rather than just stereo.

Having spent so long doing the stereo setup, an interesting challenge for the department has been working out a system with the students where they can successfully take them from that stereo workflow through to at least 5.1, and hopefully onwards to 7.1.

The monitors in the dubbing suite meanwhile are all ATC, from SCM50ASLs to SCM12 Pros: “They’re amazing and doing a really great job – They need to be nice and resilient because they’re definitely going to take a beating,” laughs Coke.

UCA Farnham has various industry professionals visit the university each year to talk to the current students, as well as holding alumni timetables. With the course being so established, there are many graduates who are on hand and willing to help. Notable alumni include director and writer Gareth Edwards, best known for directing Star Wars: Rogue One and 2014’s Godzilla. Kate Herron, who directed half of the new Netflix comedy drama series Sex Education, has also been welcomed as a visiting speaker.

Returning graduates who have visited since the building has been open have, on the one hand, been slightly disappointed that it wasn’t available during their studies, but have also been very keen to rent it, as Tim Savage, UCA Farnham’s facilities and academic development planning manager, reveals. “It’s definitely one of the shiny new assets of the university, built from the ground up,” he says. “It really takes us up a notch in terms of resources.” 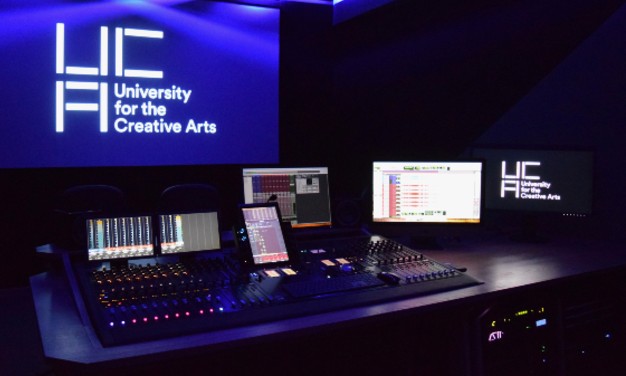 Of course, the whole motivation behind this is to show the students exactly what they will be facing when they head out into the industry themselves. It has nothing to do with their skill level, as Coke explains: “It’s an important moment when you first walk into a room as a professional – the first time you’re being paid properly and being expected to do something for somebody else – to not have that fear factor stopping you.”

UCA already did a great job of preparing students on the production side with top spec cameras, lights and building sets, but now the sound students have also got this professional grade setup to get stuck into. As they’re so used to working in stereo, getting them to think on a wider, slightly more 3D scale is the part that Coke believes might prove challenging. “I’m really looking forward to doing this though as I think it will open up more of the passion and help them to understand more about recreating the world they’re seeing on screen,” she says. “It should give them the opportunity to really experiment with the sound – I think being given what is essentially a completely different playing field will make them start imagining the possibilities. A lot of our sound students find success after they’ve graduated and so I’m happy that this is going to give them something to get their teeth into.”

Something that the department has been quite aware of over the last four or five years, is that students are coming with a different level of knowledge in the first instance. Previously it had been quite a mixed bag, with students arriving either with no previous experience, or a fair amount. Nowadays there seems to be an established middle ground, where people are gaining significant experience in music and film production due to increased access to software that was never available historically.

“There’s enough out there for people to experiment on their own and work out their own styles,” says Coke. “What we teach here is to get that to a truly professional level, unteach bad habits and hopefully replace those with better ones. As the University of Creative Arts, we’re always trying to keep this creativity going.”

In the last ten years or so, the Film Production course has shifted its focus from experimental, slightly more artist-based film making to more professional feature-film making, and Coke believes that this is what the students are really after. “Of course we have to teach the technical side of things, but we try not to put too much emphasis on it, and keep technical constraints like loudness as simple yet as close to industry standard as we can,” she explains. “Most of the time I just want them to test their creativity so it’s a fine balance, but I think technology and creativity go hand-in-hand in this day and age, which will just keep going and going.” 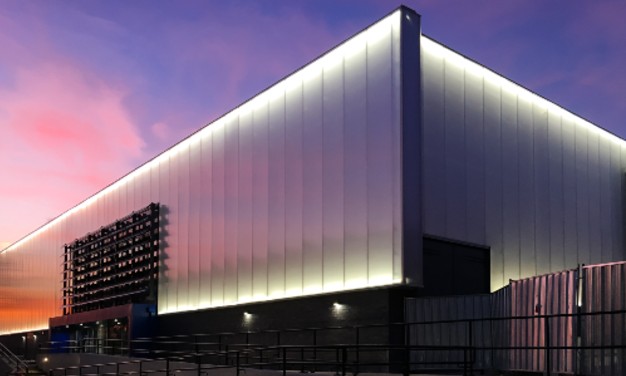 The current third year students will get to use the new dubbing suite first, with the MA students possibly getting to grips with it at the beginning of July. Using the comprehensive setup, they will be able to increasingly design their films around the idea of having a cinematic experience through the sound as well as the image.

“Having previous knowledge of post can inform your practice,” says Savage. “When you know what possibilities are available and what tools you’ve got to realise a concept, you can configure the experience for your audience very differently.”

The department visited a number of different institutions from which they felt they could draw best practices, such as the University of Guildford in Surrey with its Tonmeister course, the University of Westminster, and the University of Bournemouth. They took the parts that they liked and then, having identified various contractors, worked with them to refine their designs. A taste of this professional grade state of the art technology made the UCA guys realise that this certainly could not have been achieved with half measures, and was a useful bit of leverage in helping them bring together this impressive facility, which in the grand scheme of things makes them extremely competitive as an educational institution.