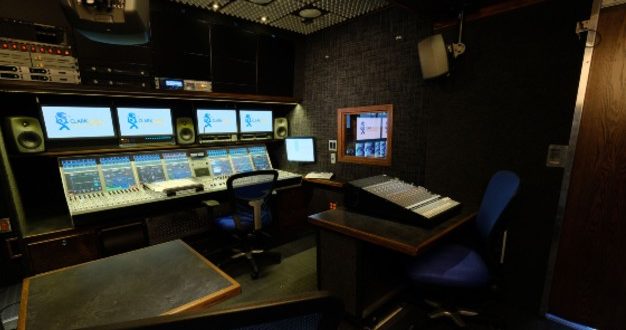 The rig was designed to be flexible; specifically to meet the demands of native 4K UHD and HD productions for everything from sports events and award programs to live game shows and breaking news stories.

“As one of the leading consoles in the broadcast industry, we felt confident selecting Calrec and, as expected, the Artemis can’t be beat,” said Stephen Sharp, chief engineer for Clark Media. “It provides us with the flexibility we need for the wide variety of events we do with the truck. The I/O is very easy to configure. Anyone who has ever used Calrec before will be very comfortable with it almost immediately. In addition, Calrec’s customer service is always very good and that is very important.”

One of the main benefits of using a Calrec console for Clark Media is its ease-of-use. “The nice thing on the Calrec Artemis Light is the Hydra2, which provides us with a lot of I/O in a very small fiber box,” added Sharp.

“We are very excited to have Clark Media continually turn to Calrec for its mobile production needs,” said David Lewty, regional sales manager, Calrec Audio America. “The company affords its customers with some of the most powerful 4K, UHD and HD solutions available, and our Artemis Light console is the perfect complement to Clark’s world-class and future-proofed OB fleet.”