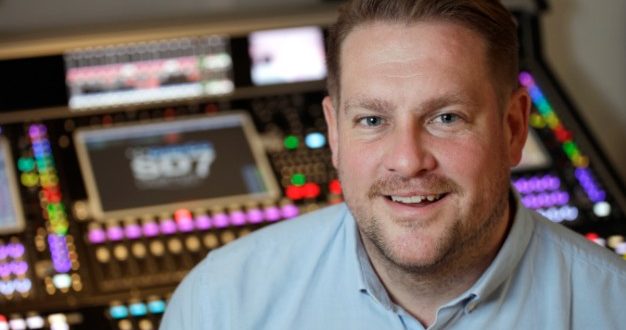 One of the strangest things I found when I started to play live music was that the all-important monitoring systems always seemed to be set up to fire the sound right at your knees. When I asked monitoring engineers to place the wedges at head height, they looked at me as if I were mad. Things have moved on and now we have monitoring systems that are actually placed in the ear – result!

However, even the best in-ear systems can create a feeling of separation and isolation and you’ll often see performers with one earpiece dangling down over their shoulder to try to get some of that live ‘vibe’ back. Traditional stereo just doesn’t have enough ‘space’ for multiple monitor inputs – you’ll usually need to use EQ to separate out the different instruments, which opens its own can of sonic worms.

New technologies are being developed to enhance the experience of those using in-ear monitoring systems and one of these is the KLANG system which comprises the Fabrik hardware, KOS firmware (now at version 3.1) and a software application. This ‘3D’ in-ear system is designed to produce ‘spatial’ or ‘immersive’ monitor mixes that can be created and controlled by the artist. The upshot of this is that KLANG’s system gives the artists and engineer a wider sound ‘stage’ to play with.

The application features a representation of a head and the instruments to be placed in the monitor mix. The artist then has complete personal control over where in the 3D ‘field’ they lie and the levels of each feed. KLANG’s system can also work with a positional sensor that allows the immersive field to track the artist’s head movement. So, if a singer has placed the drums behind them and turns to look back (while punching the air, of course), the position of the drums in the in-ear monitors also changes.

KLANG is now part of DiGiCo and has been working alongside the company for several years, as Austin Freshwater, DiGiCo’s relatively new general manager, explains. “We share the same distributor in the USA and that allowed us to get very close to the KLANG team and also the products in their range.”

Freshwater says that once you have heard the KLANG system and experienced immersive in-ear mixing, it is very hard to go back to stereo: “Being able to position sources around your head not only allows more space for the audio signals, but on average allows the monitor engineer to reduce the levels by 6dB. These two things combine to reduce ear fatigue and allow an artist to have a more natural on-stage experience.” 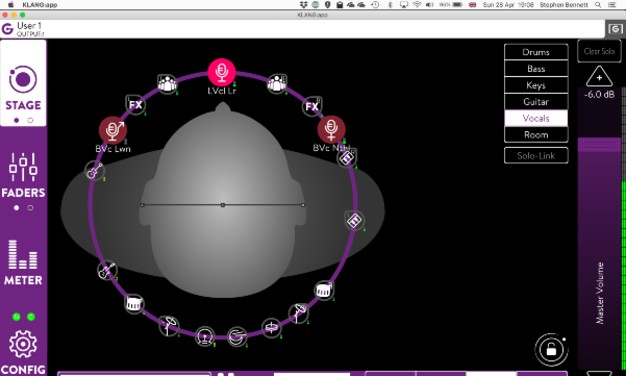 DiGiCo has also worked with immersive speakers from L-Acoustics and d&b to enhance the audience’s experience. “These are all designed for the audiences’ perspective, but when we started working with KLANG it was clear their technology would bring major advantages for artists on stage and the monitor engineers, too,” says Freshwater.

He adds that performance setups are becoming more and more complex and one of the challenges for a monitor engineer is how quickly they can set up and control the multiple mixes that they are in charge of, and that integrating the KLANG control into the DiGiCo console software allows them to control the system within their normal workflow. “The functionality provided by the KLANG/DiGiCo system removes the complication of setting up these immersive mixes and allows an engineer to quickly give the artist access to all the audio components they will need to create a bespoke monitor mix,” says Freshwater.

Connectivity between the KLANG system and the DiGiCo console is over Ethernet via the Open Sound Control (OSC) protocol. “The new DiGiCo Quantum 7 console has some fantastic features specifically designed to aid the monitor engineer, such as True Solo and Nodal processing,” explains Freshwater. “KLANG adds to the console’s monitor software suite, which allows DiGiCo to create a complete package that covers both front of house and monitoring.”

Freshwater says that KLANG’s immersive in-ear system allows monitor engineers to bring the sound that is important to an artist into focus: “Sounds that appear in front of us are perceived as more important than sounds coming from the side or behind, so immersive in-ear mixes sound much more natural and comfortable than traditional stereo – and that is key to convince artists to keep both ear pieces in and benefit from the advantages of in-ear monitoring.”

As the KLANG system offers personal mixing on stage, with smartphones or tablets, the monitor engineer can now work collaboratively with the artist who then has complete and precise control over what they want to hear – a far cry from ‘wedge’ based monitoring. KLANG’s system is at the cutting edge of immersive in-ear monitoring, but as the technology advances and further improvements and innovation are made in both hardware and software, the DiGiCo/KLANG collaboration should reap rewards: “One of the great things about KLANG is the team of people working there,” says Freshwater. “With the resources of DiGiCo now available to them, it is certain the exciting new product ideas they have can now be developed further.”

If you want to hear the spectacular difference 3D monitoring can make, download the application from the company’s website and run the demos. Your monitoring experience will never be the same again.