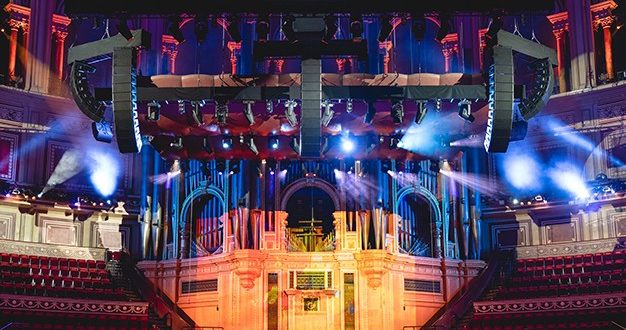 AMI finds out more about the colossal loudspeaker install at the Royal Albert Hall, which features an immersive d&b audiotechnik Soundscape system…

Over the past two years, London’s Royal Albert Hall has spent over £2 million on the biggest change to its audio system since Jimi Hendrix and Pink Floyd shared a bill there in ’69. Formally unveiled at this year’s Olivier Awards, it is believed to be the world’s biggest single-room speaker install, with over 460 speakers and 54km of cable cores.

The complex project involved the first-ever 3D acoustic mapping of the hall, six months of overnight works, and a team of industry experts – from the sound engineers behind Hamilton, Take That and the 2012 Olympics, to the acousticians (Sandy Brown), and speaker manufacturers (d&b audiotechnik).

After a recent visit to the prestigious venue, AMI got the chance to speak to two of the people behind the install, Pat Smith of SFL Group, the hall’s AV partner, and d&b’s Steve Jones, who designed its bespoke Soundscape system…

The Royal Albert Hall is an extremely culturally important venue – Why was it so important to have a comprehensive audio system and how much planning went into that?

Pat: There was about a year of initial planning and d&b did a lot of the design work, so this was happening before we were brought on board in the April. We were involved in the later design phase meetings, which ran through to around June, which was when the on-site works started. Certain details were still being worked out and revised at that point – The listed building consent application was put in at the start of July so everything had to be nailed down by then.

The main arrays of the system which are flown over the stage and the fills for the circular gallery were delivered in a three month phase which was completed in September. So although the official launch was only fairly recently at the Oliviers, they’d had a bit of time to bed-in since then. There was another three months where we did the installation in all of the boxes – there’s over 300 speakers which makes a huge difference in those spaces. Obviously they’re the most premium, expensive seats in the venue and now they should be the best sounding.

Steve: d&b has done a lot of shows at the venue over the years so I’ve been here multiple times to build 3D models of the room. As our technology gets greater we’ve honed these models. I don’t know of another venue that’s quite this – believe it or not – slightly asymmetrical  shape, and because of its age, trying to get hold of good CAD drawings was quite difficult. We were quite fortunate that another company was commissioned to do a 3D laser scan, which gave us an accurate 3D model from which we could then build our acoustic modelling programs and start simulating how the sound system performs in this type of space, and how the room responds to that in terms of reverb.

Were there any particular problems that you encountered?

Pat: It’s a huge privilege to work in such an incredibly iconic building, but it really is a product of a different architecture and it does throw challenges at you. We were working off architectural drawings at times that were over 150 years old. The accuracy of that and how it was actually built during that era was quite different to what we’re used to working with in the modern day. We could start drilling through a wall or some floorboards and discover that things aren’t as we expected them, so we had to be quite flexible and adaptable all the way throughout. 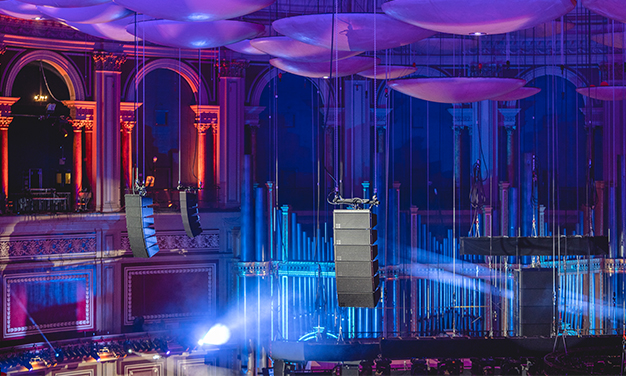 Steve wanted to float the speakers in front of each gallery bay whereas previous attempts at this kind of solution had put them on the lighting bar across the bay, which is really too high to mount a speaker. We had to put 23 new holes in the plasterwork in the ceiling around the gallery area, for which we had to get heritage approval, work out the exact location and decide what we would fix it to. Then there was working out a way to actually get up to the 40ft ceiling. We brought in a company called Unusual Rigging who really made it look very easy by hanging a platform from a radial RSJ so that we could scoot around up there.

Drilling into ornate, antique plasterwork is quite hairy and there’s a lot of responsibility there if something goes wrong, but fortunately it went very smoothly. The scale of the project with its absolutely critical deadline was probably the most intimidating aspect. It was a great collaboration with all the other companies involved. At such a prestigious venue, you’re working with an assortment of people and organisations, all of which are at the absolute top of their game. The team at the Albert Hall were very hands on – They take a lot of responsibility in terms of the quality and experience of what they deliver. Having a client like that keeps everyone very focused. We’re a UK sales and installation partner for d&b so there was already some history there.

To what extent does the install future-proof the venue for generations to come?

Steve: We decided that the in-house system should not be, in itself, a Soundscape system, but we have positioned the speakers so that we can easily drop into place two extra hangs across the stage to turn this into a full Soundscape system, which we did for the first time at Christmas with Nutcracker. When we use this object-based approach, the instruments work their way through the sound system in a very different way, and the upshot as an audience member is that you don’t hear sound coming from the speakers, but from whatever you’re seeing in front of you. In this sense, it’s almost as if the speakers disappear and it becomes a more true performance.

Pat: The key driver for the venue throughout has been about taking back control of the audio themselves. There’s a lot of things that you can do with a permanently installed system that you just can’t when you’re rigging a system for a one-day event. We did things that no one has been able to do in the venue before. d&b really had to think outside of the box for the system design, and Steve really pushed to make sure that this was an uncompromising solution. Some of the very end seats on the edge of the circle have historically been the most difficult seats to achieve good sound but now they sound like some of the best seats in the venue!