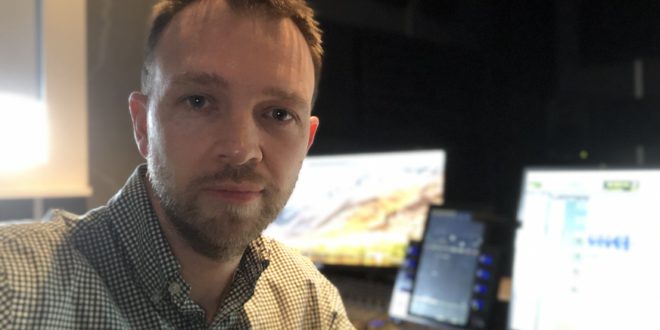 Dan Piggott of KORD.Media offers his thoughts on changing workflows in the post-production landscape…

I think it’s widely accepted that there are two ways in which a facility can deliver audio post, employ staff or use freelancers, so there seemed to be an opportunity to explore whether there’s something that sits in the middle of those.

About 18 months ago I started experimenting with different workflows and since then, various things have happened that have thoroughly supported this theory.

I actually set up a fairly high spec’d home studio in 2017 – Genelec 5.1 monitoring, Avid S3 with Dock – with a view to it being a kind of proof of concept setup.

My objective was to see if I could seamlessly sync a project between my “remote” studio and a studio where the project would be signed off. I found that it is possible and have been growing this workflow ever since

Now I’ve decided to take on a slightly larger overhead – take it out of the house and, instead, put it in a central location in Manchester City Centre – which then opens up the door to voiceover and ADR, dry hire etc. It means that there’s then a few different options available to my clients.

As a very small independent audio offering the idea would be to find a new position in the market, which gives facilities another option when they start reaching capacity.

The studio is being built in Bonded Warehouse, St John’s on the site of the Old Granada Studio, and at the time of writing I’m about two weeks from completion. There’s lots of really cool and interesting stuff going on in this part of town. It really is an incredible building with a hugely impressive history.

So I’ve taken a unit of roughly 500sq.ft. – There’s going to be a mezzanine above the dubbing theatre which will house the technical area, while  there’ll also be a voiceover booth and a small edit suite.

There will be the option of monitoring in 7.1.4 through the CB Electronics TMC-1, and there is a Dante network being installed, which will allow very flexible recording options – the Focusrite X2P provides an interesting solution for the voiceover booth.

The Avid S3 is an incredibly cost effective piece of kit and when housed in the Modson furniture, also being installed, should rise in professional appeal somewhat.

It’s difficult convincing people that there’s an alternative way of working, but when you look at it on paper it makes a lot of sense. By booking someone to deliver a fixed amount of work and not booking them for a fixed amount of time, you can apply working practices found in many other industries, i.e. you quote to deliver a job to a deadline. For the first time technology is allowing our industry to work in that way.

A company approached me recently to mix four one-hour tv shows. They asked me to mix them off-site because schedules had slipped and the capacity of the facility couldn’t accommodate them any longer. The mixes were completed to deadline, and the client then attended for one day to sign off the four episodes.

Here’s an example of how a facility has managed to put eight days worth of work through a dubbing theatre in a single day, rather than tying it up for all eight. Through being reactive, they found an incredibly efficient way of utilising their resources.

Through the democratisation of post production equipment, many other freelance mixers now own their own dubbing theatres, so facilities would do well to be proactive and start putting the structures in place that allow them to also facilitate.

Dan Piggott is a dubbing mixer and company director of KORD.Media. He is also a member of The Association Of Motion Picture Sound. His three main areas of professional experience are television drama, animation, and short-form sound design.