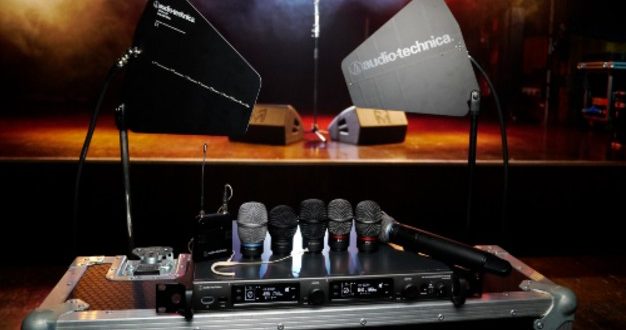 There is somewhat of a misperception between physics and products in the market at the moment. While it’s always been more efficient to use analogue if you have a bandwidth problem, analogue wireless systems traditionally involved third order intermodulation and lots of frequency planning.

Shure then came up with the ULX-D and later Sennheiser with the 9000, and now the 6000 Series. Both digital systems make for equidistant frequency planning. They say this is more efficient because you don’t have to worry about intermodulations, and people think that this has something to do with digital. This is physical nonsense, because the Audio-Technica 6000 Series system can do the same thing in analogue, squeezing in 31 channels in 4MHz without the disadvantage of operating range limitations.

This 4MHz window does not exist in Europe, leaving no dedicated small window where you can just put such an expensive technology in one place. But technically, spectral efficiency doesn’t go along with digital. Digital typically needs more space, while an analogue system can be packed more efficiently if you do it right. Digital does give you some benefits when it comes to controlling and embedding additional data, so in terms of communications there are many great things you can do. This all comes at a cost however, which is audio quality and latency.

With these systems, companies need to make the choice between the full operating range, the audio quality and the occupied bandwidth. The latter is specified with legal regulations and so it’s generally just the decision of a trade off between operating range and audio quality. The best compromise is somewhere in between with the long-range modes (which is good quality MP3), but this is still not completely uncompressed as you would expect from good digital audio quality, which by definition is also up for debate!

The main disadvantage of an analogue system is the compounded circuitry and the so-called deviation limiter, two factors which are very much audible. The problem is, every analogue system is using a technological pre-emphasis and de-emphasis. So on the transmitting side you boost higher frequencies with a shelving filter to lift them above the noise floor, and on the receiving side you’re reducing the high frequencies by pushing down the noise floor (de-emphasising). Frequency response in this case should stay the same, yet having said that, when you increase the high frequencies on the transmitter side and do a lot of frequency modulation, these high frequencies hit the deviation limiter and it sounds bad, because it’s not an audiophile limiter but a technical one to stay within the legal limits. To this end, all the plosive sounds get over-excited and distorted. The de-esser components that people buy and use on vocal tracks sometimes is basically coming out of the misuse of wireless microphones with this maximum deviation.

On the A-T 3000 Series we use very little deviation to stay far away from this over-excited pre-emphasis hitting the limiter. We also spend a lot of time getting the noise floor right so that the signal is stable, which makes it a little more complicated and expensive to build. For us though, it’s always about the quality of the audio. With the 3000 you don’t get that distortion and edgy, aggressiveness – Instead it’s very pleasing to listen to and not tiring on the ears.

With the 5000 Series on the other hand, we use a completely different approach with a dual compander, making a two-way active system out of the audio signal. We have a crossover frequency around 500Hz; everything below this goes through one compressor and everything above this goes through a second compressor individually. So we split the signal, mix it back together, transmit it, and then do the same thing on the receiver side. The huge benefit of this is that – specifically on handheld microphones – when the proximity factor kicks in, the low frequencies are compressed and expanded on the other side while the middle and high frequencies where the speech intelligibility and tonality happens is all unharmed. In this sense, we can get away with this problem of the compander effect that people sometimes hear. We can work our way around the disadvantages of the analogue transmission and keep and maintain all the advantages, like very good RF range and good audio quality with zero latency.

Everything around the 3000 and the 5000 Series systems was about finding an answer to the most pressing problem: spectrum. The 3000 Series is typically a system where the user is also the operator when it comes to live sound and music. In those cases, they are the ones who need to control which frequency they’re using, and the easiest answer is to make the tuning bandwidth as wide as possible. 60MHz provides very good usability, but there are some limiting factors in terms of how wide you should go. One of them is, the wider you go, the more expensive your amplifiers have to be because there’s more energy intake. As I explained earlier, the noise floor thing was an issue for us and we put in a lot of effort to get that under control, but that then allowed us to go the full 60MHz, which we think is a very good compromise to ensure that people do not run into problems and have enough spectrum to play with. 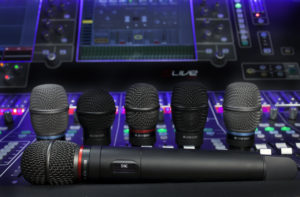 Then we thought, wouldn’t it be cool if you could access a backup frequency much quicker with one push of a button. It’s a show saver for applications like a band playing on stage or someone doing a presentation or conference – If you experience any hitches, you push the button and seven seconds later you’re good to go.

Lots of companies are launching their own solutions, but Audio-Technica is not convinced that digital is the only solution. People often say that the future is digital, but one thing that is also very critical is that the future stays analogue, as long as we’re listening with our ears which are analogue, and the music and voices we want to capture with microphones are analogue signals. There are advantages and disadvantages of both digital and analogue, but if you tackle the disadvantages of the latter, I think you come up with a better solution.

It almost seems as if we’re leaning into the vintage route, and it’s pretty valid to make that conclusion, but we really believe that these analogue systems outrun the digital systems – The operating ranges are better, you have the link stability benefit, the zero latency benefit, and no audio quality disadvantage. We don’t see it as keeping the old; we simply invented a new analogue way of transmitting in order to utilise the best of both worlds.