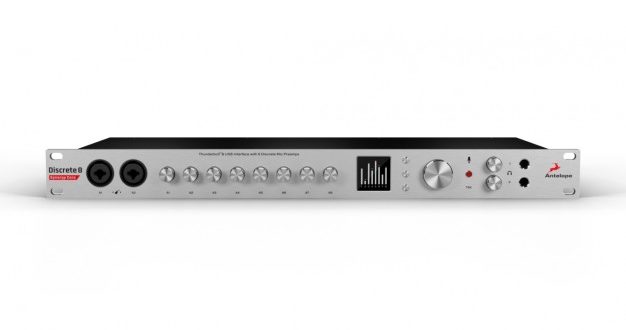 Adding a Discrete 4 Synergy Core or its Discrete 8 Synergy Core bigger brother to recording rigs really means that DAWs can make more efficient use of available CPU power to host native effects — effectively extending the lifecycle of an existing Mac or PC, so users need not necessarily upgrade to the latest and greatest computer spec to run all of their favourite plugins.

Discrete 4 Synergy Core offers four console-grade, discrete mic preamps, plus a total of 14 inputs (including four LINE-1/4” JACK | MIC-XLR combi inputs for mic/line/instrument sources) and 16 outputs (including L and R MONITOR outputs and LINE OUT on four TRS connections) — expandable via ADAT IN OUT and S/PDIF IN OUT on TOSlink, and access to Antelope Audio’s digital clocking technology through the WC OUT 1 2 connections. Discrete 4 Synergy Core also comes complete with a library of 36 real-time FPGA FX for free from Antelope Audio, worth well over $3,000 USD.

Loaded, likewise, with dual DSP chips and an FPGA processor, the Discrete 8 Synergy Core is designed for mid-sized studios. Its connectivity count totals 26 inputs (including eight LINE-1/4” JACK | MIC- XLR combi inputs for mic/line/instrument sources) and 30 outputs (including L and R MONITOR outputs and two REAMPoutputs on TRS connections, and LINE OUT 1-8 on a D-SUB 25 connector) — expandable via dual ADAT (IN 1 OUT 1 and IN 2 OUT 2) and S/PDIF IN OUT on TOSlink, plus a user-friendly FOOTSWITCH jack to speed up workflow. This time the pristine AD/DA conversion delivers a class-leading 130dB of dynamic range (on the monitor outputs).