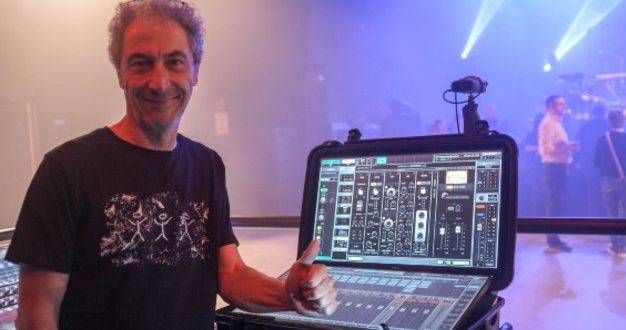 FOH engineer Bertrand Siffert and monitor engineer Frederic Flori, aka Urbain, chose a number of tools from Waves Audio — including the eMotion LV1 Live Mixer for both FOH and monitors, SoundGrid servers, and an arsenal of Waves plugins — for the 2019 tour of the Switzerland-based industrial rock band The Young Gods.

Siffert will be marking his 30-year anniversary with The Young Gods this September, having been the band’s live and studio engineer since 1989 and discovering the eMotion LV1 mixer last year at the Montreux Jazz Festival.

“There are so many must-have Waves plugins that I use,” said Siffert. “On vocals, I use a combination of plugins, getting the headroom that I need as well as a terrific wall of sound. My go-to plugins for vocals are the Waves Abbey Road Reverb Plates (which I use on drums as well); Scheps Omni Channel (perfect for lead vox); the Kramer Master Tape for that special stereo vocal sound; and the H-Reverb Hybrid Reverb for FX.

“When it comes to drums, my go-to’s are the Renaissance Axx on kick and snare buss; the C6 Multiband Compressor on toms, the F6 Floating-Band Dynamic EQ; and the Manny Marroquin Distortion for that special kick sound. I use the Renaissance Bass for samplers specifically and sometimes on the kick drum as well; GTR 3 for FX and delays; and the GEQ Graphic Equalizer on the Master L-R samplers’ group. I could go on and on, there and so many other creative plugins – I can’t stop!”

Monitor engineer Urbain added: “The choice to go out with the LV1 was made by Bertrand at FOH, and since we are sharing the same stage rack, it made sense to go along with his choice to ensure the best compatibility and ease of workflow for both of us. I also have to say that the challenge of taking this technology out on tour and the possibilities offered by the platform were a big plus. My only special request was to have a hardware controller to be able to look at the stage at all times and have my most important channels at my fingertips without having to constantly look at my screens during showtime.”

On choosing the Waves eMotion LV1, Urbain concluded: “The benefits of using the LV1 is its portability, small footprint and ease of setup. Once this is done, I really love how the system sounds and what I can achieve on this tour, where we use house monitors that are really different from day to day.”