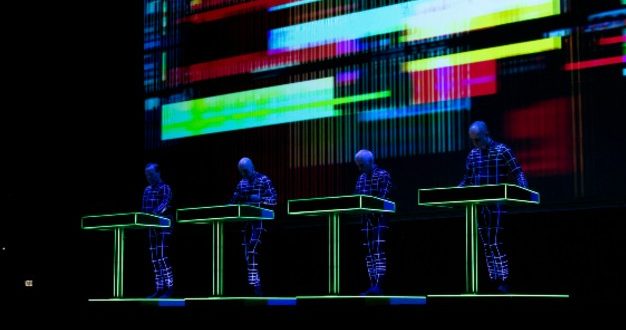 Kraftwerk put on four sold-out shows in April in Tokyo, for which d&b audiotechnik Japan provided the system solutions.

The immersive system used at the Orchard Hall, which belongs to the Bunkamura complex, included KSL loudspeakers with D80 amps and d&b Soundscape. The combined use of KSL and Soundscape was a world premiere and a perfect complement to the visual 3D experience offered by the Kraftwerk performances.

The main hangs flown at the concerts were five KSL arrays, each consisting of six KSL8 (top) and two KSL12 (bottom). Behind each of the five main hangs were two flying SL-SUBs. They supplemented the KSL arrays in the low frequency range and delivered a powerful bass which was extremely evenly distributed throughout the entire hall. The KSL Systems were driven using d&b ArrayProcessing.

The surround reproduction came from 20 point source loudspeakers from the d&b Y-Series consisting of six Y10P (110° x 40°) and fourteen Y7P loudspeakers (75° x 40°). Each side of the hall had seven positions supplemented by six rear positions.

MSI JAPAN was in charge of the technical equipment for Kraftwerk’s stage shows in Japan, while the KSL loudspeakers and the SL-SUBs were supplied by Arxiduc Audio Co. Ltd. and d&b Japan

The audio and visual concept was to present concert-goers with a stereoscopic 3D projection flanked by an immersive audio experience. This was achieved by using a d&b DS100 signal engine coupled to the mixing console system by MADI. Serge Gräfe controlled the individual signals by using the En-Scene user interface provided in the R1 Remote control software.