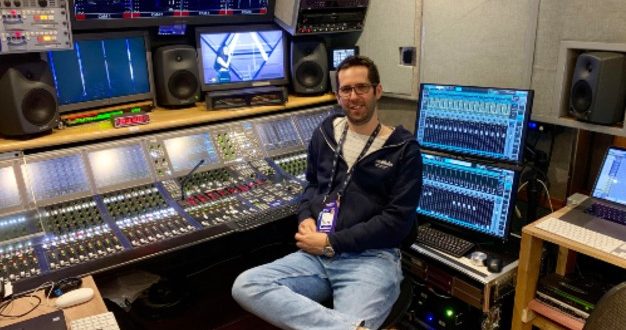 Waves powers the sound of Eurovision 2019

“When it comes to broadcast, you are usually looking for system redundancy and backups; eMotion LV1 delivered just that,” said broadcast mix engineer Omer Barzilay. “It is a clear advantage to have a software-based system: we were able to easily create two identical systems with two Waves SoundGrid servers each, and we created even more backups on our personal laptops.

“One of the greatest advantages of using the LV1 is that I was able to mix most of the songs ahead of time,” Barzilay added. “I was mixing about a month and a half in advance of the show, at my studio, by routing all the stems that I received ahead of time from Pro Tools to eMotion LV1, creating all the automations and effects so they were ready for the show. Time is crucial when mixing so many different songs for such an immense musical event, and if I hadn’t used a software base mixer, I would never have been able to be prepared this way.

“During the show we routed all audio to the eMotion LV1 mixer and to a multi-track recording computer. We used the LV1 mixer’s A/B input to route the recorder back in, so we could continue mixing the show between takes. This was very fast, and as soon as a delegation finished their first take, we kept mixing it until the next one. We didn’t waste any time. The biggest advantage of the Waves eMotion LV1 is that you get to bring your studio with you to live events. Some of the plugins are effects I’ve been using for the last two decades!”

“For mixing the 41 delegations’ songs and the interim guest acts, and to ensure that it sounds as close as possible to the original tracks, each song had snapshots containing the changes of the vocal effects, the basic balance of the lead and backing vocals, and also the overall tracks,” explained Eran. “The Waves Primary Source Expander and the Scheps Omni Channel came in handy for processing each of the vocalist’s channels, followed by the Waves C6 Multiband Compressor on the vocal group for final shaping. I also used the Waves F6 Floating-Band Dynamic EQ on the playback group from the side chain/vocal group, to make sure that the vocals are in your face and up front, especially when the vocal was competing with a massive musical arrangement. I also used Waves’ H-Reverb Hybrid Reverb and H-Delay Hybrid Delay for vocal effects, the Waves Doubler for harmonizer, JJP Vocals for backing vocals, and the Waves/Abbey Road EMI TG12345 Channel Strip for special overdrive effects and parallel compression on lead vocalists. To complete the sonic picture, on the Master L/R, I slapped on the Waves SSL G-Master Buss Compressor followed by the L2 Ultramaximizer.

“Eurovision 2019 was a massive production in terms of scale and responsibility,” Eran concluded. “Waves tools enabled us to take on this challenge with the confidence and conviction that we will have a smooth ride.”