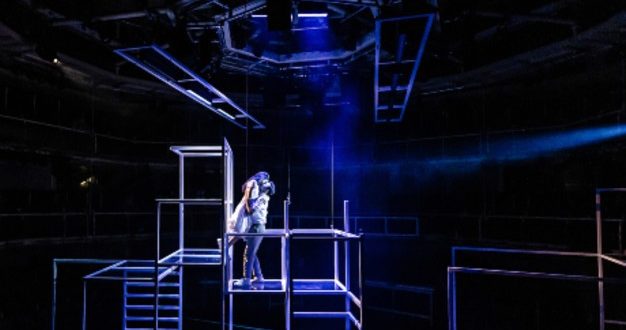 A re-imagined version of West Side Story, one of the most popular musicals of all time, has been playing at Manchester’s Royal Exchange Theatre with KV2 Audio providing sound reinforcement.

Sound designer Richard Brooker has been using KV2 loudspeakers almost exclusively since 2013 and had no hesitation in specifying KV2 for West Side Story. “One of the biggest issues in the Royal Exchange is that you’re extremely limited as to where you can put speakers, so as a designer it helps to know that the tools at your disposal are the very best and that you’re used to using them,” he said.

Brooker’s design is based on concentric rings of loudspeakers to serve each of the three tiers of seats that are divided into seven separate blocks all the way around the stage. There are fourteen front fills sunk around the edge of the stage floor, while the main vocal system, comprised of seven KV2 Audio EX10 compact, high-output, full range active loudspeakers, is flown in a ring above the stage. 41 vocal delay speakers form part of the concentric rings to supplement the frontfills and main EX10 vocal ring. A ring of seven compact, low-profile ESD25s flown above the EX10s serves the upper gallery.

In addition to the vocal system, Brooker specified a pair of EX10s in a L/R configuration for the band system. Interestingly, due to the in-the-round nature of the venue, the 11-piece orchestra is not located inside the theatre itself, but rather in a specially designed sound-proof booth in the foyer equipped with a video relay so that the musicians can see the stage and the cast can see the conductor.

As a complement to the main L/R system, Brooker has also provided for a comprehensive delay system based on the compact EX6 2-way active loudspeaker. He specified a total of 16 EX6s across the three levels of seating, supplemented by six wide-dispersion, under-balcony EX26s for the upper circle. Finally, a pair of EX2.5 dual 15-inch subwoofers flown up in the roof complete the design. “The result is a superbly rounded, powerful yet totally natural sound that enables the audience to lose themselves completely in the music and the atmosphere,” said Brooker. “I’m really proud of what we’ve all achieved here.

“As a theatre, the Manchester Royal Exchange is brilliant because it’s so intimate,” Brooker added. “There are 700 seats, but not one is further than 9m away from the stage, so it’s a wonderful experience for audiences. However, it’s a very challenging venue in which to deliver good sound, especially for a musical, and particularly when the majority of the audience already knows every word and every note of every song!”

Previous What does the rise of streaming mean for audio post?
Next Waves powers the sound of Eurovision 2019