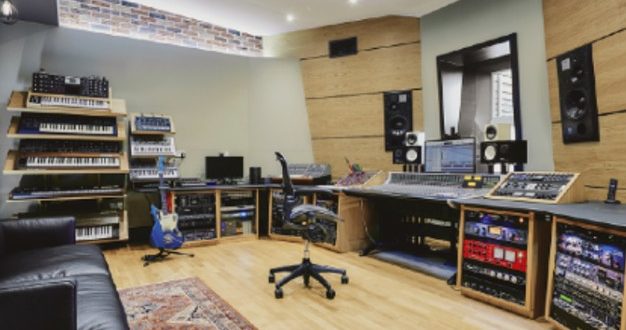 Mark Gardener – the frontman and guitarist for British alt rock band Ride – has opened OX4 Sound, a new multi-room facility in Oxfordshire with an SSL AWS 948 console as its centrepiece.

The opening comes as Ride are about to release a new record: “It constantly surprises me, the Ride phenomenon; we did a big thing the first time around, but now we are playing bigger shows than we ever did back in the day,” said Gardener. “But I always thought one day it would level off, so in the interim I got heavily into recording, trying to demystify the process of being in the studio. It’s always been my thing, really.”

Gardener was fortunate to receive some studio education along the way, working from greats such as John Leckie and Jack Rieley, the latter of whom became a guru to him.

Gardener had worked a lot ‘in the box’, but found he was taking a long time to create, and find the sort of space and depth he needed in his mixes. After a meeting at SSL HQ, Gardener was impressed with what the company’s AWS consoles were capable of, and soon invested in an AWS 948.

“I quickly realised that SSL had totally nailed it in terms of understanding how people work today; in minutes, you’ve got a full recall on this desk, which is phenomenal,” he said. “And I am back to using channels – so the whole space and width thing is right there. Plus, it’s way more fun when you can be tactile. I love how you can flick between the E and G EQs instantly, and it makes perfect sense, as before I got the console I was using plugin versions of the SSL E and G channels – now I have the real thing!”

Gardener continued: “I am also astounded by its preamps. I have a lot of cool outboard kit, but recording directly from the SSL is amazing, as it’s just an incredible sounding console. I love the old boards, of course, and a lot of Ride tracks were mixed on old SSLs, but the AWS is so much more efficient than an older console. The DAW integration utilising the delta-Control automation is also brilliant; I’ve got my console keys set up for Logic, and I’ve got all my transport stuff right there at the push of a button.”

Sessions are now underway at OX4: singer-songwriter, Susie Stapleton, was first through the doors, accompanied by Jim Jones Revue’s Gavin Jay, and Stranglers’ drummer, Jim Macaulay. The Stranglers themselves have been in the studio recording new material last month.

“I feel so fortunate to be working in a room like this, purpose built by Studio Creations, where I can hear everything so perfectly, and I’m excited to see how the artists will respond in the coming projects” Gardener concluded. “The SSL AWS is definitely the new love of my life – and by the end of the year our studio extension will be complete, comprising a second control room and more artist space. If we continue as we’ve started, then I can only see us growing more in the future.”

Previous James Towler adds Focusrite RedNet to studio and live setup
Next What does the rise of streaming mean for audio post?