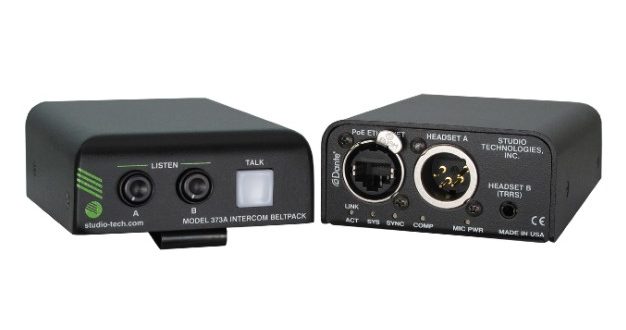 Studio Technologies has introduced two new Dante-enabled intercom beltpacks, the Model 372A and Model 373A.

Both units, which combine a single talk channel with two channels of listen, are capable of supporting professional and consumer-grade, single- and dual-channel headsets with superior audio quality.

The Model 372A is intended to connect with headsets that use a 5-pin male XLR connector, while the Model 373A interfaces with headsets that use a 4-pin female XLR connector. Both are also equipped with a 3.5 mm 4-conductor TRRS jack, allowing direct connection with earbuds and gaming headsets. Only a Power-over-Ethernet (PoE) connection is required for interconnection with a Dante network.

Over a standard IP network, multiple Model 372A and Model 373A devices, and other compatible Studio Technologies’ beltpack units can be used to create party-line intercom applications with an external Dante-enabled audio matrix, such as the Studio Technologies’ Model 5422 Dante Intercom Audio Engine. In addition, these new beltpacks can be used “point-to-point” or interfaced with Dante-compatible matrix intercom systems.

The Model 372A/373A is designed with a low-noise, wide dynamic-range microphone preamplifier. Its associated voltage-controlled-amplifier (VCA) dynamics controller (compressor) ensures that microphone audio quality is preserved while minimising the chance of signal overload. Low-voltage DC power can be enabled as required to support electret microphones. In addition, a call receive function allows Model 372A and Model 373A users to be provided with a visual indication that a call signal is active.

The STcontroller software application is used to configure all Model 372A and Model 373A operating parameters. Selection choices include electret microphone power on/off and preamplifier gain, headphone monitoring, sidetone audio operation, and talk button operation. This flexibility allows for a variety of listening environments to be created, including stereo, single-channel monaural, and dual-channel monaural. The talk pushbutton switch can be configured from among three choices: Push to Talk, Latching, or Push to Talk/Tap to Latch.