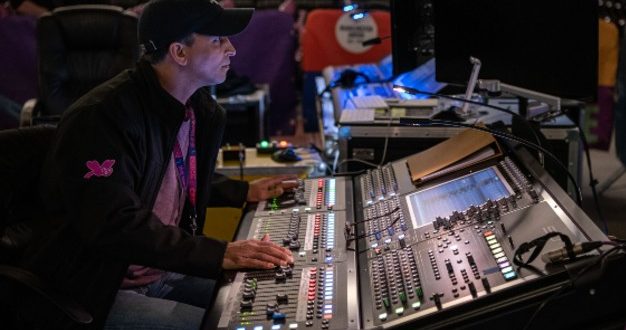 Adlib is supplying full technical production – sound, lighting, video and rigging with over 100 points – to the ongoing 2019 arena tour by Brendan O’Carroll and his Mrs. Brown’s Boys phenomenon.

Presenting its first ever musical tour, “Mrs Brown’s Boys D’Musical!” the show has just finished the first of three one-month segments, each covering four major cities where they play for a week.

Hassane es Siahi is the FoH engineer, the Adlib systems engineer is Alan Harrison, Steph Fleming is the monitor engineer and Shona Steadman is looking after mics and RF. Fiona Gibney & Gareth Woods are the producers.

A comprehensive CODA Audio system was chosen to deliver sound for the tour, while the cast members all use a variety of DPA headset mics. The two main PA hangs were smaller than normal – with (max) 12 x CODA AiRAY a side, flown slightly further downstage than the standard positioning.

The subs were 12 x CODA SCPs, positioned six a side on the floor, while the side hangs were kept as discreet as possible – both for acoustics and sightlines – these comprised of up to eight x AiRAYs, with four ViRAY downs depending on the venue. A flown centre cluster of six ViRAY covered the first rows of the audience.

CODA APS (array point source) speakers were attached – via special brackets – to the lighting trusses just above the corners of the thrust. These, coupled with more HOPS on brackets on the stage, allowed the focus of the audience in the first rows to be drawn directly towards the actors, keeping the immediacy of the humour.

The delays comprised eight x ViRAYs each on the left and right, with eight of the little 5-inch TiRAYs in the centre which Harrison said “pack a real punch” for their tiny size.

All of the flown speakers and those attached to the trusses were powered by 18 amplifiers – nine a side – and with TiRAYs, APS’ and HOPS’ being run passive / 1 amp channel each and the AiRAY and ViRAY bi-amped. Onstage the cast use side-fills for monitoring rather than IEMs which is proving a better solution for their specific brand of musical comedy. These were an array of three flown HOPS each side working in conjunction with two more HOPS on the upstage rail of the front lighting truss, pointing down. 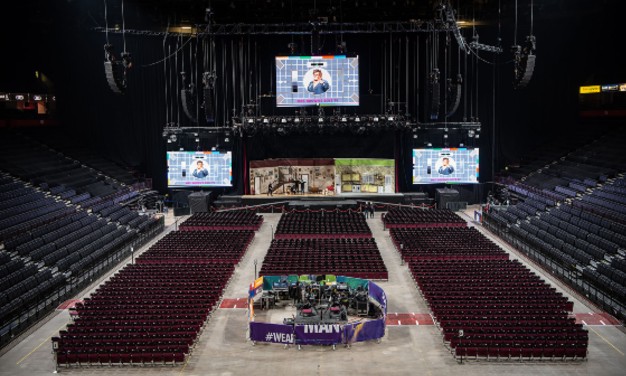 The consoles were both DiGiCo’s – an SD10 for Hassane at FoH, Steph used an SD12 for monitors, and Shona utilised a DiGiCo S21 to monitor the RF channels.

The cast sing live to playback with the tracks stored on a fully redundant 16-channel QLab system which is at the heart of the performance. Musical director Andy O’Callaghan and Hass spent considerable time on perfecting the transitions and programming during cast rehearsals at LS Live.

A DiGiCo Optocore network was used to connect and deal with all the track signal routing from the QLab, the FoH and monitor consoles and racks.

The QLab rack was built by Adlib and sat at FoH, with lighting for the musical numbers (not the spoken word parts of the set) timecoded, the tracks were triggered by Mike Summerfield at FOH, upon which the QLab sent timecode into his consoles.