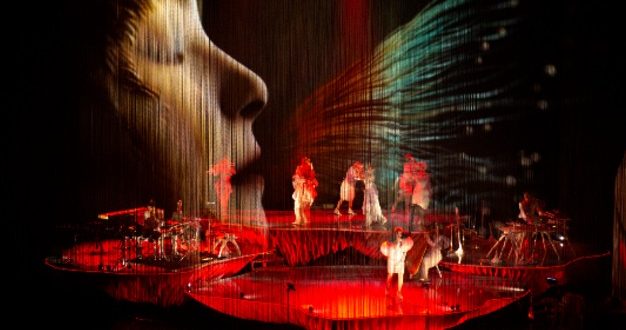 Beginning the sound design conception in a studio in Iceland, the production has progressed through production rehearsals in the Backstage Centre, London, to The Shed in New York City. Cornucopia’s sound was designed by Björk and FoH sound engineer John Gale, supported by Southby Productions, and Steve Jones from d&b.

Steve Jones from d&b explained, “Björk wanted the sound for Cornucopia to create an otherworldly sensory experience that draws the visual, aural and virtual elements together and utilising Soundscape, from the studio composition scenario all the way through to the show performance scenario has delivered of that vision.”

The Shed – built within the new Hudson Yards development in Manhattan – is a 200,000-square-foot structure that physically transforms to support huge flexibility in programming and performance styles.

Cornucopia is staged in The McCourt space, formed when the outer shell of the structure is rolled out to cover the adjoining plaza and create a 17,000-square-foot light-, sound-, and temperature-controlled hall for large-scale performances, installations, and events. It can accommodate a seated audience of approximately 1,200 and a standing audience of more than 2,000.