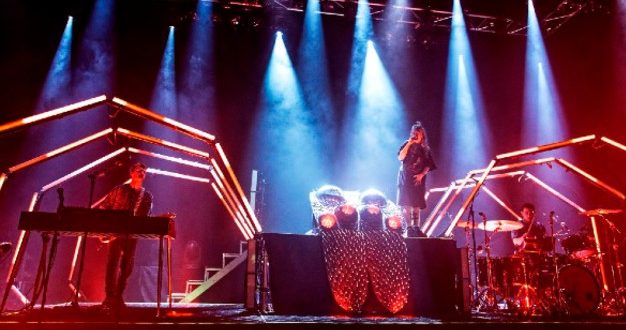 Drew Thornton, FoH engineer, and Salim Akram, monitor engineer, use compact, 12-fader C1500’s to mix over 50 inputs from an array of live instruments and backing tracks. Their rig is fed by a quartet of DX168 stage boxes connecting to a DM0 MixRack via EtherCon connections.

Thornton designed the dLive system to travel with the band. “Throwing down your stage box and pushing out everything patched and line-checked in ten minutes is amazing,” he said. “We plug it in and it works like a dream. And I’m a firm believer that if you get your mix right, you can handle things with as few as eight faders. Having 12 faders on the C1500 is a luxury.”

Akram noted, “I built my dLive show file on the airplane. I’ve been on a lot of other consoles and nothing has a workflow that is this intuitive and customisable. And, DCA spills were the key for me – that was a game changer. Now, I have my mixes on SoftKeys which flip the faders and everything else I need to get to quickly.”

Thornton and Akram put the internal dLive effects to good use in recreating the immersive textures Eilish is known for. “I’ve got multiple plates for the drums and I’m starting to play with gated reverb effects,” said Thornton. “And after years of looking for the perfect vocal, the Dyn8 does what I need. It’ll smooth things out as I play with really subtle or aggressive effects on the song.”

On monitors, Akram has his own approach. “I’m using the Dyn8 on Billie’s vocal and on some of the mix outputs. The 16T compressor sounds great and the Opto is for musical drums, sometimes on tracks,” he added. “The way Billie runs her show is so musical and we pay attention to the blend of the tracks so it doesn’t show up like a traditional pop act.”

As the fly dates wrap up and the bus portion of the tour kicks off, the C1500 surfaces will be transitioned into use by the support acts while Sound Image provides dLive S5000 surfaces for FoH and monitor duties.