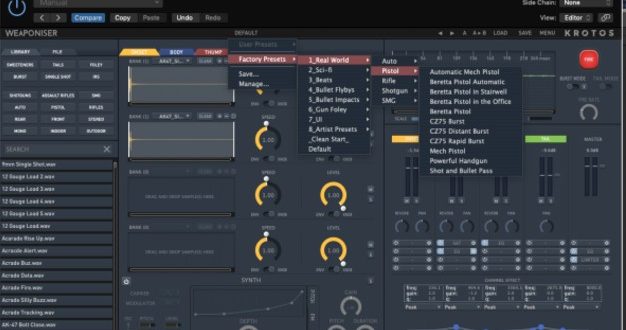 Sound design and effects are just as important as the visual elements of film, television and video games. The modern ‘just in time’ methods of production – where editors and directors are changing the soundtrack in the dubbing theatre right up to the release deadline – means that the days of spending weeks with an ARP 2600 generating the voices of robots, shooting rifles in fields or scouring machine shops for the right kind of engine are probably long gone.

While veteran FX engineers usually have a vast library of self-recorded effects, mangling these so they don’t sound the same in each production can also be time consuming.

To the rescue comes a series of plug-ins from Krotos, all of which are designed to generate realistic – or more fantastic – sound effects while providing enough manipulation tools for each user to imprint an individual take on the result. All the plug-ins are available with add-in libraries, while the Sound Design Bundle 2 collects them all together at a significant discount. The plug-ins are available for Mac or Windows computers and in 64 and 32-bit flavours.

Dehumaniser 2 is designed to create monster noises – very useful for your average rom-com! It features a kind of object orientated interface – or nodes as Krotos calls them – that can be linked together to perform different tasks. It reminds me a lot of MAX/MSP and that’s no bad thing. Each node can perform a specific sonic manipulation, such as pitch shifting, ring modulation and vocoding. You drag the nodes to the screen and connect them with virtual cables and each node has various parameters you can adjust to tailor the sound. It’s incredibly easy to build bespoke voices, but Krotos offers some useful presets to get you started, as it does with all the plug-ins in the package. 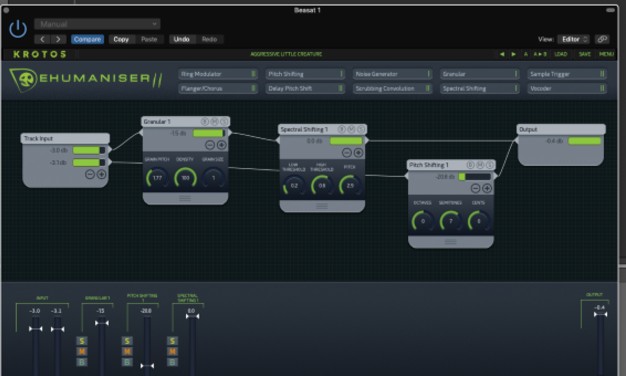 Igniter is a plug-in designed to generate vehicle noise, whether it be engines accelerating, in-vehicle Foley, sirens, aeroplanes or futuristic vehicles that don’t exist. The software has four ‘generators’ that create the final sound. The main tab is Granular which allows you to select the engines and exhausts and the various parameters that control their behaviour. Krotos provides quite a few samples to get you going, but you can also purchase further libraries or use your own recordings using the One-Shot generator, which consists of four sophisticated samplers, or Loop System, which links loops to the master ‘revs’ controller.

The Mod generator allows the user to control various behaviours of the sound generation system and, with eight to choose from – all of which can have multiple control destinations – designing complex effects is relatively easy. The final generator is a synthesiser with five oscillators that has various waveforms controllable by AM, FM and Vibrato. This is useful to add low frequency ‘meat’ to your effects and should help create trouser-flapping low end for your Dolby Atmos dubs or sweeten other noises you create. A useful file browser and mixer with DAW-quality insert effects are also part of the plug-in. It’s a complex beast and Igniter struggled with my ageing Mac Pro, so some significant CPU power is needed to fully exploit the plug-in’s possibilities. If you’ve ever wondered what a Porsche (or Dacia!) engine sounded like through a Ferrari exhaust, you can satiate that desire with Igniter!

Weaponiser is pretty much what it says on the virtual tin – a generator of all kinds of weapon noises from ‘traditional’ guns to those of a more sci-fi variety. The plug-in features a browser/file locator/tag system that helps make navigating the available sounds easier and splits its generative abilities into four ‘parts’ that comprise the composite sound of the weapon. Onset defines the initial explosive transient, Body the main ‘heft’ of the sound, Thump the low frequency content and finally Tail which defines the decay part of the weapon. This latter feature can be further enhanced using the included convolution reverb which delivers samples of real-world spaces. Each generative ‘Engine’ has multiple parameters you can tweak to create your bespoke effect and weapon firing can be in single shot or ‘burst’ (for repeated shots). There’s also a big friendly red FIRE! button to test your sounds. Krotos’ recordings of weapons fire are of a detailed and high quality and include multi-mic positions. 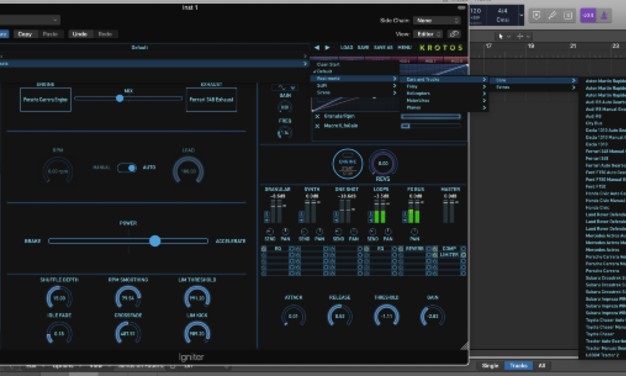 Reformer Pro is a ‘mangling’ plug-in that takes incoming audio and uses this as a controller, based on its frequency and amplitude, to manipulate samples loaded from specialised library files. These libraries are loaded into the four quadrants of the onscreen XY pad, which then can be used to balance the effect on each, while a ‘visualizer’ gives some idea of the sonic properties of the output. You can adjust the playback speed and volume of individual library outputs and there are controls for input transients and dynamics. The plug-in can be controlled via MIDI in some DAWs.

Of the four plug-ins in the bundle, Reformer was the most difficult to get my head around. Its output is unpredictable, but it is capable of generating some unearthly sounds that will fit right in with the horror genre, for example. You can also create your own libraries for use in the mangling process and the presets included really help you understand how it all works.

In all, this Krotos bundle provides a great number of tools that are extremely useful to the busy sound designer, while allowing enough creative experimentation to produce individual results. This brief review doesn’t do justice to the wide scope of sonic manipulation that the Krotos software provides, nor how easy it is to control the myriad of parameters of each plug-in feature. But if you’re a professional sound effects engineer, the full-fat versions of the bundled plug-ins are a no-brainer as are the extended libraries available. If you’re a dabbler, there are low cost – and free – versions of the plug-ins that might be all you need for your productions.

In any case, Krotos offers a generous demo period for you to try out the software, but be warned – once you’ve added the sound of a Ferrari revving alongside to your Morris Minor documentary, there may be no going back to risking your life dangling a microphone from a bridge over the Monaco Grand Prix.

– Four products and two library bundles at 30% off