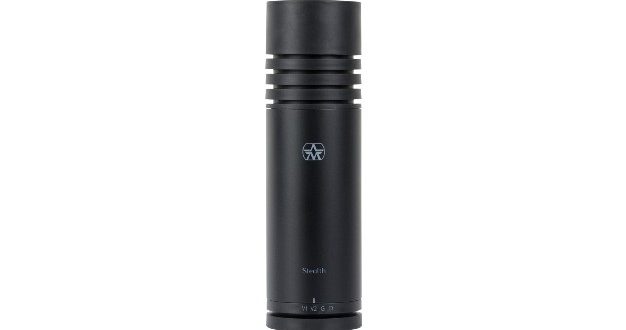 You have to feel a little sorry for microphone manufacturers. In an age where digital processing power sprinkles fairy dust on virtually every aspect of recording, in the world of microphones at the very front end of the audio chain innovation is a tough gig. But British mic makers Aston are not in the business of same old same old and their new Stealth mic is here to prove it. First the Stealth is a large diaphragm dynamic mic, nothing new there, with a built in autoswitching class A mic amp powered by phantom – now that is new!

There are four different ‘voices’, which are essentially four discreet circuits offering four different tonalities, two voice settings, a setting for guitars and a dark setting, ideal for late night sessions. Then there’s the mechanical stuff, an internal sorbothane suspension means the Stealth doesn’t need a suspension mount and in terms of fixing it, it has an internal socket for a clip that is light, durable and weighs next to nothing. It’s safe to say a lot of thought has gone into the Stealth.

And a lot of listening too. Aston has assembled a top team of producers, artists, engineers and liggers. Well not the liggers, but all the others were there and a massive listening exercise was undertaken to refine all the acoustic elements of the Stealth.  Aston have also put their shoulder to the unboxing experience too – the Stealth is nicely packaged, though I always kind of miss a case, yes even a thin cloth case so that when I chuck the Stealth in a bag (which I often did) I don’t scratch that slightly menacing all-black finish. The ingenious new clip is included but there’s no windshield as Aston claim the Stealth doesn’t need one.

Once you’ve mounted it on the stand thinking, will that clip really support it? (yes it will) and will that clamp really hold it? Again, yes it will. The overall effect is pretty impressive – this is a big ass mic, it makes my Beyerdynamic M99 look positively discreet! You really will need to trust the clip and clamp because the Stealth is not a side address proposition but an endfire mic and that is going  to apply considerable leverage when levelled and ready for action.

The first thing you want to do is consider whether you want to power up the mic or not. The onboard class A mic preamp supplies at least 40 dB of gain. I need to think about that before pressing scene recall on an iLive, recalling a scene that had phantom on my Stealth channel where no phantom was before. Talk about ringing the room, I rung the building and several near by – so think carefully. I broke out a little Soundcraft for a simple voice and guitar gig – without remembering that the Soundcraft has permanent phantom and with mandatory 40+ dB of class A wallop, my gain structure was ‘interesting.’

The second thing is which voice you are going to use. The choice is on a ring that sits flush to the body of the Stealth at the connector end. Designed not to be nudged, the selector needs to be gripped around its circumference in order to move – you’ll get the hang of it, no problem. You are actually moving cogs and wheels to change connections inside the mic and you’ll want to do that with the gain turned down. And finally there’s a mic clip release button on the bottom of the mic. Actually that isn’t a mic clip release it’s just a button adjacent to the mic clip socket which actually engages the discreet LED lighting that tells you phantom is on. In some terribly clever fashion the mic clip engages itself automatically on insertion and with a dash of bravery and a firm hand you can reverse the process. Aston claims that you can hang the mic upside down from the clip without danger of droppage, unless you swing on it. So don’t do that.

With the onboard mic amp and four different voices, Aston are claiming that this is the world’s most versatile microphone – of course the marketing department have to earn their corn like everyone else. To be fair, they do have a point – you have eight different options before you even begin to position the mic and the difference in sound when the mic amp is engaged is considerable.

Without the mic amp the Stealth needs a fair chunk of gain – about 70 dB without yelling into it. This is ten dB more than my PR40 or M99, but I don’t care when I have quiet mic amps with tonnes of gain. The M99 itself has a couple of EQ positions but I left it in flat as otherwise there would just be too many options There was a consistent contrast between the Beyer and the Stealth, more top end on the Stealth and a distinctly warmer bottom on the M99. Having said that I felt the Stealth had more weight in the bottom than the very well regarded Heil PR40 and in my very limited use of other people’s ears the Stealth won out as having more presence.

I would say the Stealth leans towards a condenser in presentation. To test the proposition I fired up a Neumann condenser – the BCM 104 large diaphragm. In preparation for this stern test I shoved some phantom up the Stealth to engage the preamp. This makes a big change in the Stealth sound. The 104 has that seductive Neumann sound that is almost impossible to define but you know it when you hear it. In comparison the Stealth just has a slight thickening on some vocals and a shelfy top that isn’t as silky smooth as the 104. Which in case you are interested, costs three times as much. The Stealth works well on a guitar cab, mean enough for the level, detailed enough for definition and weighty enough to be full bodied.

Live and out and about I dropped the Stealth into three or four live gigs as a vocal mic and each time it did sterling duty – it cuts through the mix easily. You can pop it if you try but then you can pop anything if you try. Mechanical handling was commendably low – at least 10 dB better than the M99 when both were directly mounted to a bar. I didn’t have a chance to run the Stealth in every situation it could possibly handle and it is an incredibly versatile performer. I understand the pitch that says you don’t need a gain lifter but I think this is more of an issue for podcasters than broadcasters. I I like the fact that the phantom power option changes the sound, in fact I found it a bigger change than the optional ‘voices’. In summing up, James Young from Aston outlines three factors in the sound of a mic – the capsule, the electronics and the mechanics. Each area has been addressed by Aston in the Stealth and it really is a special mic. What do you know – innovation in the microphone world without DSP is still a thing!