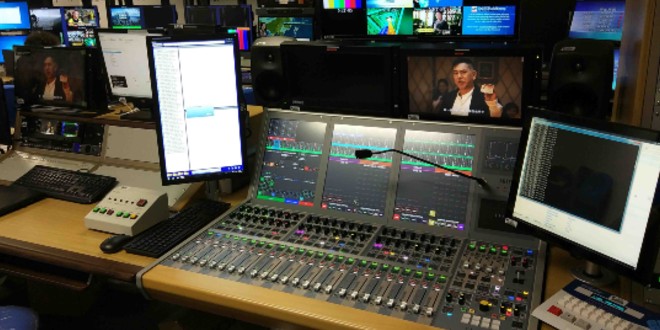 TVB, the largest broadcaster in Hong Kong, has confirmed the purchase of a Brio12, its 10th Calrec console purchase to date.

The new Brio joins a fleet of Artemis consoles, including two Artemis Beams and one Artemis Light console that were purchased last year, as part of TVB’s ongoing audio technology upgrade.

The Brio12 is being used as a portable console and was most recently used for live sports events including the 2019 Tissot UCI Track Cycling World Cup held in January, and the SIXDAY Series PRURide cycling event that happened in Hong Kong last month.

“Connecting via fibre, it’s easy to change the I/O cards to accommodate different productions. We’re using MADI cards for our intercom connection and Dante cards for signal interchanging between a PA console and the broadcast console,” said Mr. Law Yui Wah, studio production department/assistant manager at TVB Hong Kong. “The Brio12 is small enough for us to use portably yet offers enough connectivity and power, surpassing other consoles on the market in this price range.”

Anthony Harrison, international sales manager for Calrec, added: “By being able to move the Brio around, TVB Hong Kong is taking advantage of the true benefits of the Brio’s versatility as a compact console that doesn’t compromise on quality. TVB is proving that product performance and price point are at the top of its purchasing decisions when it comes to audio consoles.”